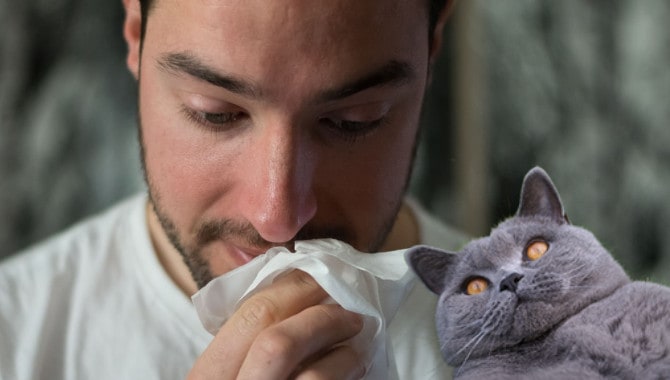 For the cat-allergic cat lover, life is a series of compromises. If you have your heart set on a sweet, fuzzy feline companion such as a British Shorthair, it can be very disheartening when the mere presence of a cat nearby sends you into a sneezing fit. Some people attempt to get around the issue with allergy shots, others by seeking out supposedly hypoallergenic cats; I’m not one hundred percent certain how this happened but the British Shorthair somehow acquired a reputation for being one such hypoallergenic cat breed. Alas, I can tell you from personal experience that if you’re allergic to cats you’ll be allergic to a British Shorthair.

Are British Shorthair cats hypoallergenic? Unfortunately, no. Their fur is short but very thick and — as any British Shorthair owner can attest, tends to get absolutely everywhere, even when brushed weekly. They produce allergens in the same quantities like any other cat and will trigger the same reactions. While the hair itself isn’t the issue, the dander and saliva attached to it will make you cough and sneeze.

If you’ve come to this page as a desperate cat lover with a cat allergy problem, you must have lots of questions. Will a British Shorthair trigger your allergies? How can you avoid becoming ill if you own a cat and are allergic? What steps can you take to reduce the problem? Is there any way you may safely own a cat? Read on to find some answers, and hopefully a workable solution to your problem. There are ways you can greatly improve your allergy situation, even if you can’t get rid of your cat allergy issues completely.

Cat allergies and the British Shorthair

Are British Shorthair cats hypoallergenic? Excuse me while I reach for a tissue before I answer that question. No, unfortunately, they are not a hypoallergenic breed at all! I can tell you this firsthand. I am one of those obsessive cat lovers who can’t be dissuaded from sharing a home with a feline friend to the despair of my GP.

I hate to tell you this but my beloved British Shorthairs have always set me off just as badly as any fluffy Persian or luxuriant Maine Coon. As I say, I’m not entirely sure how the reputation for being low-allergy cats attached itself to the British Shorthair.

This breed has many, many delightful qualities but being hypoallergenic is definitely not one of them. This mistaken belief is partly due to the fact that they have shorter hair, which people assume is somehow less allergenic than long hair.

My personal theory is that people read news stories about the supposedly hypoallergenic cat genetically engineered a few years ago and got the wrong end of the stick. The cats were created by a company that somehow tweaked the animals’ DNA so that they would produce less of a certain protein, Fel d 1, in their saliva. The idea was that the reduced protein levels would prevent the cats from causing a reaction in susceptible individuals.

READ ALSO:
Do British Shorthair Cats Like To Be Picked Up?

The last I heard of it, the company responsible was planning to sell the kittens for around three and a half thousand dollars, rather steep, even for a pedigree cat. This company used British Shorthairs as their original breeding stock, which seems to have given people the idea that British Shorthairs must be naturally low-allergy felines. In fact, the breed wasn’t chosen for any magical hypoallergenic properties; the company selected the British Shorthair because these cats are easy to get along with.

Ethical reservations aside, I can’t fault their judgement. The British Shorthair is an excellent choice for many reasons -friendly, sociable but independent, non-destructive, easy to look after. What they aren’t is free from allergens, or even lower in allergens. They produce Fel d 1 and other proteins that readily trigger allergic reactions in susceptible individuals:

These proteins are present in the animals’ saliva and dander. When your cat washes herself, she transfers these proteins to her fur. This gets shed and the proteins end up everywhere, on your furniture, in your carpets, in the air.

The proteins are very stable and don’t easily break down. This is why some cat allergy sufferers may still experience a reaction even when the cat has been removed from their living space: the guilty proteins are still lingering in the environment and causing mischief. It’s also why shorthaired breeds produce just as much of a reaction in many sufferers than longhaired ones.

Still, I’m living, sneezing proof that you can be allergic to cats and still enjoy the company of your British Shorthair. Let me tell you how I manage my situation.

How can I prevent my British Shorthair from setting off my allergies?

The short answer is that you can’t, at least not entirely. As long as you live with a cat, any cat, you’re going to experience symptoms to some degree or another. What you can do is reduce those symptoms to the point where they stop bothering you.

My personal experience has been that a cat allergy can diminish over time as your body gets used to Fel d 1 and the other proteins involved in causing the allergy; some people report the opposite effect, however, with their symptoms getting worse.

There are steps you can take to minimise your problems, starting with reducing the number of allergens in your living space.

I’ve cleaned my house and brushed my British Shorthair but I’m still sneezing! What can I do?

If your symptoms are interfering with your day-to-day life, medication may help. There are lots of effective over-the-counter remedies that you can access. I prefer not to take antihistamines constantly but I do pop a one-a-day non-drowsy allergy pill about three times a week, alternating between loratadine and cetirizine. For skin reactions, wash your hands after petting the cat and use an aqueous cream to treat the itching.

From time to time I use a nasal spray, either a decongestant or a steroid like beclometasone, and eye drops occasionally. I’m also very careful about taking all my asthma medications as prescribed. You should, of course, check with your doctor before embarking on any course of medication.

I also find talking to my local pharmacist tremendously helpful – they’re often an untapped font of information on allergies and conditions like asthma. They can help make sure you’re using allergy medications safely and correctly. If over-the-counter products aren’t helping, talk to your doctor about getting something a bit stronger on prescription.

Your doctor may also be able to advise you on obtaining immunotherapy (“allergy shots”) for your cat allergy. If your symptoms are very severe, especially if asthma is involved, you should really consider re-homing your cat. It’s terribly sad but lovely as British Shorthairs are, they’re not worth developing a serious health problem for.

I confess that I’m not an expert in the wonders of genetic modification but I have to say I’m a bit sceptical. Now, it’s true that Fel d 1 is a major allergen for us cat-allergic people; it follows that reducing the amount produced would greatly reduce symptoms.

Still, I’m not sure that this project would work as advertised. Less of something isn’t the same as none at all and it only takes a minute amount of an allergen to cause a response. If the cat lives with you, it would seem inevitable that the amount of Fel d 1 would build up until it reached the threshold at which an allergy was triggered.

The same goes for supposedly hypoallergenic breeds like Rex cats and Sphinxes. They’re beautiful, elegant creatures in their own right but not necessarily the solution to your problems. My friend’s Devon Rex is a real character and I love him to bits – but he still makes me sneeze. The lack of cat hair might make allergen control easier but I don’t believe a bald cat is an answer to your prayers. Sorry.