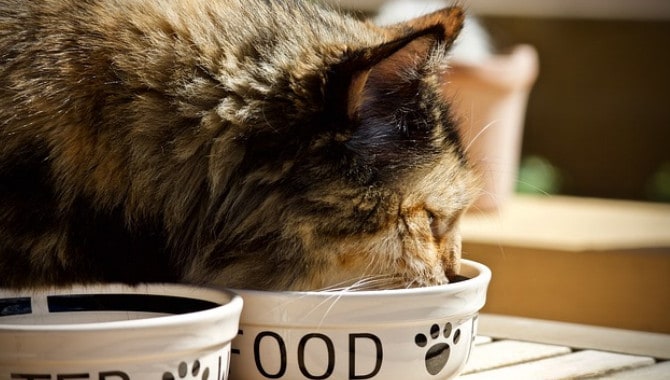 Many people nowadays like to feed their cats home-made raw food, either as an alternative to processed commercial pet foods or just as a special treat. This is a contentious practice, however,  some vets and cat experts criticising the current raw food trend. While British Shorthairs are likely to be absolutely fine if they occasionally consume raw foods, or if given a raw food diet that’s prepared with plenty of caution, it is possible to harm your cats if you’re not cautious about which raw foods you give them.

Can British Shorthairs eat raw food? Yes, in principle. After all, cats evolved to eat animals that they kill. That said, cats in the wild do pick up parasites and other diseases from their prey. Some foods should never be fed raw to your cat as they are especially dangerous to feline health.

If you’re deciding whether to give your British Shorthair raw food, you need to know the risks involved as well as the potential benefits. Which foods could harm your pet? Which foods are safer? Why offer your cat raw foods at all? Read on to find out some of the dangers involved in giving your British Shorthair raw food and how you can do so more safely.

Raw food and your British Shorthair

Can British Shorthairs eat raw food? On the face of it, you’d think the answer was an obvious “yes”. Cats are obligate carnivores – hunters who’ve evolved to devour their prey freshly killed, the very epitome of raw food. You don’t see feral cats running out with saucepans to cook up the small rodents and birds they like to hunt, do you?

READ ALSO:
What Is The Best Food For British Shorthair Kittens?

The raw-food proponent’s logic holds that since the domestic cat’s ancestors evolved to eat raw meat in the form of small mammals, birds etc, it follows that a raw-food based regime is the healthiest diet for the modern house-cat. Many vets and cat experts would beg to differ with raw food fans, citing the possibility that your cat may acquire diseases from raw food.

Despite this note of caution a whole industry has sprung up around providing raw food for pets: recipe books, how-to videos and prepackaged raw cat foods are proliferating like never before. The benefits alleged for raw foods are many. Fans claim that a raw diet will keep your cat happier, healthier and fitter by more closely fitting their evolutionary nutrition profile.

Show-cat owners claim that a raw food diet helps their animals look sleeker and more appealing to the judges, with brighter eyes and thicker, glossier fur. Some cat owners who have switched to a raw food diet claim that persistent health and behavioural problems have been resolved since the change.

On the anti-raw side, we have numerous medical opinions and those of experienced cat health experts, who express concern over the increase in raw food adoption. Opponents point to the fact that human-processed raw meats are nothing like the prey that a cat would hunt in the wild. Cats bring down small wild birds, not farm-reared turkeys or battery chickens; and even the most dedicated feline hunter would not be dining on raw mutton or beef, sheep and cows being somewhat outside any cat’s weight class.

Raw food also brings up the possibility of serious and potentially even life-threatening illnesses – parasites and bacteria can be transmitted if a cat is given food that’s raw or improperly cooked. Another issue is pet preference: while British Shorthairs are famously good eaters without a picky bone in their bodies, they don’t seem very keen on raw food. At this point, I feel compelled to mention the raw food fans I’ve encountered who insist that a cat can live happily on a diet that’s made up mostly or wholly of raw vegetables. This is so dangerously wrong it verges on animal abuse. A cat is an obligate carnivore. She requires meat to live. Cats certainly can and do eat vegetables (I met a British Shorthair tom once who was obsessed with frozen peas) but these should be a minor addition to a meat-heavy diet.

It’s true that cats hunt live prey when they can get it — and that British Shorthairs, in particular, are champion hunters. Unfortunately, this also means that every so often your outdoor shorthair may pick up something nasty from a kill. Worms are a very common feline ailment — easy enough to treat but still something that needs attention.

This is one of the potential downsides of raw food in general. While modern methods of farming and processing meat get rid of most parasites, there are still a few instances now and then where some unfortunate consumer picks up an uninvited intestinal hitchhiker. Much the same thing can happen to your cat. In fact, most feral rescues will be carrying worms from their supposedly healthy and natural raw diet. Sometimes these can actually be life-threatening.

Intestinal parasites are no joke; if you do decide to feed your cat raw food, you will need to monitor her fairly closely in case she picks up something unpleasant. Food poisoning is another issue. While the short, acidic gut of a cat can kill infections that would harm a human, they can still fall prey to bacteria such as salmonella. This is rare but it can occur.

You can reduce the risk by parboiling the meat you give your cat rather than serving it completely raw. Some foods, such as tuna and other fish, eggs and milk, must never be given raw to your cat. Raw fish can contain an enzyme that breaks down thiamine in your cat’s body, while milk contains lactose which British Shorthairs can’t tolerate. Raw milk, in particular, is very bad as it may also contain pathogens that can make your cat seriously ill.

Why choose a raw diet for your British Shorthair anyway?

Pet food scares have helped to drive the popularity of raw and homemade cat foods. It’s true that some of these have involved a very real threat to people’s beloved companions. Contamination with chemicals such as melamine could have real and serious consequences to pet health.

Cats are vulnerable to such contaminants because of their sensitivity and small body size. Another form of contamination, ironically enough, has been with bacteria such as salmonella – the very contaminants we’re told can be found in raw food. Proper food safety procedures at the point of production are intended to do away with these infectious organisms but if the food is improperly canned or packaged they can flourish.

Such procedures ought to prevent pet food from being contaminated with bacteria but these have been high-profile instances where these weren’t followed. Many cat owners also feel that commercial pet foods may be nutritionally insufficient – with some justification, as cheaper foods may indeed lack some of the nutrients required for optimal health. Preparing your cat’s food also gives you more control over the ingredients. This can become important if your pet has sensitivity issues or is suffering from weight problems (something British Shorthairs are very prone to, especially as they get older). There are specialist foods which can help here but they do tend to be expensive. In this situation, it may be economical and practical to make your cat’s food at home, although it doesn’t have to be raw.

Is raw food worth the effort?

Switching your British Shorthair to a raw food diet can, in theory, be done safely, if you’re prepared to spend a lot of time making her meals. You will need to prepare not only raw meats but also the essential vitamins that may be missing from the food, such as taurine and arginine. The process can be very labour-intensive and making up raw food in bulk may be inadvisable – you can’t store it for too long, even refrigerated, as it can quickly go bad.

You will also need to supervise your cat’s eating, as raw foods need to be cleaned out of the bowl as soon as your cat has finished eating. Raw foods can’t be left out as there is a risk of disease. From a scientific perspective, there’s no real reason to switch to raw foods but some people find them a practical solution to the expense of good-quality cat foods.

In general, though, you will probably find the extra effort isn’t worth it. British Shorthairs tend not to be picky eaters and will happily consume ordinary pet food. To avoid weight issues, choose a good quality food with plenty of protein and a grain-free formula. While small amounts of grains and carbohydrates in food won’t harm a cat, they’re unnecessary to feline nutrition. A highly active cat who burns off a lot of calories might conceivably benefit from the additional energy that carbs provide but frankly the term “highly active” does not describe the average British Shorthair. Grains and carbs in pet food can contribute to weight problems in this breed.