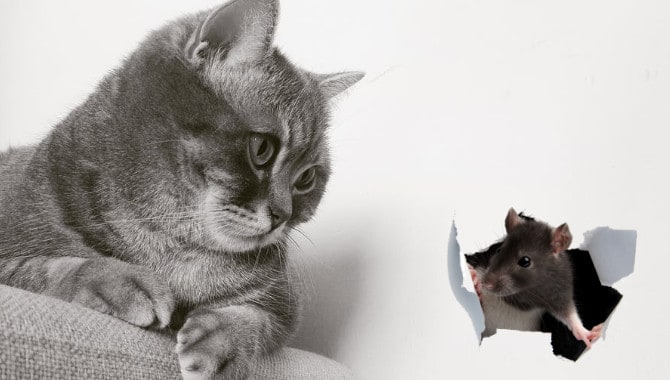 Despite their legendarily friendly and loving natures, British Shorthairs are still cats — with all the feline hunting instincts that imply. In fact, that cuddly British Shorthair curled up on your bed may be one of the most eager mousers around deep down.

To discover the source of the British Shorthair’s mousing prowess (and how to lower their kill score if you don’t want a hunter in the house) we will need to learn something about feline psychology and the British Shorthair in particular. Knowing this information will make you a better cat owner — and it may help deal with some of your pet’s more problematic behaviours, so read on.

British Shorthairs certainly do catch mice. Just try to stop them. Like her cousin, the American Shorthair, the British Shorthair cat is an agile and voracious hunter. Mice, rats, voles, shrews, any small mammals – she will chase them down with alacrity. It can be rather a shock to watch your loving teddy-bear cat metamorphose from cuddly companion to hungry carnivore.

My second Shorthair, a meek little tortoiseshell who wouldn’t say boo to a goose under normal circumstances, would turn into an absolute killing machine if any vermin got into the house. To understand this, you need to know a little about the history of domestic cat as it relates to the British Shorthair. Domestic cats descend from wildcats, which are natural predators with little interest in forming social links. This tends to make people assume that domestic cats like the British Shorthair are naturally aloof. In fact, domestic cats are colony-forming and highly social. They form large networks led by matriarchs, sharing tasks like kitten-rearing and hunting.

One reason that domestic cats kill more than they can possibly eat is that in a feral colony they would need to bring home the extra food to feed colony-mates who could not hunt: the very young, the old and sick, recent mothers and so on.

Domestic cats without human carers need to hunt very actively to find enough food for themselves and their colony-mates. Those fierce instincts have been preserved – unsurprisingly since the early domestication of cats was driven by the need for humans to protect stored food from vermin. The cats who were most prized by these early cat owners were the ones who kept the mice in the grain stores down or who dealt with the rats onboard trading ships.

This is certainly true of the British Shorthair. They’re the descendants of cats kept by the Romans in Britain as a way to preserve food stores and keep down the spread of disease. The result is a loving, sociable cat with ferocious hunting instincts. The next question will depend on whether you think catching prey is a positive or negative trait.

If you live in a property where rats and mice are a problem, you may want a nice eager mouser to take care of your vermin for you. While British Shorthairs are a good breed for this, there’s no absolute guarantee that a specific animal will be a great hunter. One British Shorthair might be a mouser, while another wouldn’t be able to catch a mouse if it was doing the backstroke in her water dish.

It depends partly on the cat’s own personality but also on her background. The answer to the question “Why doesn’t my British Shorthair catch mice?” may be that she was never trained to do so as a kitten.

Although cats may have a hunting instinct, they won’t hunt as effectively if they haven’t been taught to hunt by their mothers. As small kittens, British Shorthairs with mothers who hunt are taught how to chase mice and other small animals in stages. First, the mother will bring dead prey back to the kittens and eat it in front of her babies so they understand that this prey is good to eat. As her kittens grow, she will bring back half-dead prey and kill the animal while the kittens watch. Eventually, she will bring back prey that’s alive and largely uninjured so her kittens can hunt and kill for themselves. Cats who don’t undergo this training as kittens may still hunt fairly successfully; if you want a good mouser, though, your best bet is to obtain your British Shorthair kitten from someone who keeps their cats as mousers. They’ll have the early training they need and the genes for hunting.

How do I stop my British Shorthair from catching mice?

There’s no foolproof way to prevent a British Shorthair from hunting. They are predatory carnivores and a loving pet owner needs to understand that. Part of caring for a cat means coping with “presents” like the occasional decapitated vole. You can reduce the kill-count by making your British Shorthair an indoor cat; this won’t protect any mice or other rodents who enter her domain but it will reduce the number of small birds and animals she can get her paws on.

Should you decide to allow your cat to enjoy the great outdoors, you can disrupt her hunt by giving her a collar with a bell to scare away prey animals. The glitzier and more obtrusive the collar the better, as the visual cue will tend to alert her prey. Some people swear by a hair scrunchie around the cat’s neck but my British Shorthairs just pull them off; the same goes for plastic claw covers, although I know some British Shorthair owners who use them successfully.

At this point, someone usually brings up the idea of declawing as a way to protect the local wildlife. I cannot possibly condemn this barbaric practice strongly enough. “Declawing” is a euphemistic term for what is done to the animal. In fact, the top joints of all her toes are amputated. She can’t claw anymore but she also can’t walk properly and will be a terribly unhappy cat. IF YOU DON’T WANT CLAWS, BUY A GOLDFISH!

How do I stop my British Shorthair attacking other pets?

I get asked this a lot. People seem to think there is some magical combination of threats and punishments that will prevent a British Shorthair from trying to hunt prey animals just because you happen to be keeping them as pets. Sadly, this is not the case. Just as they’ll hunt small rodents who sneak in through cracks in your skirting-boards, if you yourself bring birds and small animals into the house as pets your British Shorthair will probably go after them.

Understand that you will need to protect them: keep them in secure cages, and if you let them out make sure your British Shorthair is in another room. Even birds who should theoretically be able to stay out of her reach may become snacks — I once saw a British Shorthair leap about four feet into the air, straight up, in an attempt to catch a passing sparrow. Those quirky odd-couple animal friendships you see in videos on the internet at the exception, not the rule.

Your British Shorthair is not going to look upon your guinea-pig with filial affection, she’s going to look upon him as lunch. The gerbils, canaries, white mice and fancy rats you bring into her space are her natural prey and you are not going to persuade her otherwise. Those fierce predatory instincts can survive any amount of training.

Do mice stay away from cats?

Recent scientific discoveries prove that mice are capable of recognising a specific protein produced in cats saliva. This acts as a “fear trigger” for them and makes them stay away from the property “marked” by a cat. We have covered marking the territory by male cats in Do British Shorthair Male Spray?.

Do cats eat mice or just kill them?

In most cases, you British Shorthair cat will not eat a dead mouse – that if you feed him well:).

Females are considered much better and effective hunters than male cats. This is because of females being involved in training their kittens how to hunt. Some owners report that an older and more mature male cate will be a much better mauser than a female cat. So, again it will all depend on individual circumstances.