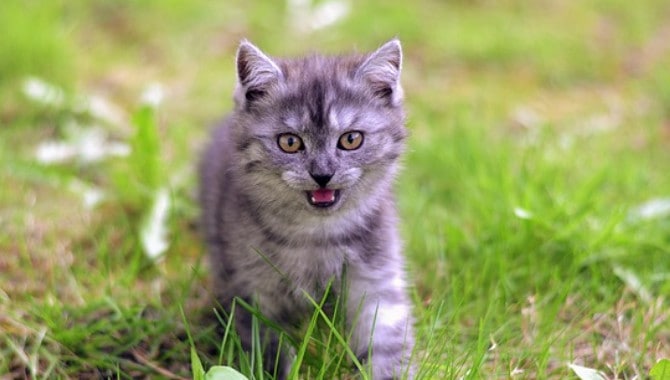 Like any breed of cat, individuals within the British Shorthair breed vary significantly in terms of personality. Some cats are very quiet, while others are what we call “talkers” — they meow a lot and are generally very vocal and communicative.

Do British Shorthair cats meow a lot? Yes, in general. You do find the odd quiet British Shorthair but this breed is rather notorious for being talkative. They tend to be chattiest when they want something like food, help to get in or out of the house, and their favourite thing of all: attention.

A cat’s meow is an interesting phenomenon, something that a lot of pet owners misunderstand. This can cause unnecessary difficulties for cat owners and their pets alike. To learn more about the ways your British Shorthair talks to you and find out how to deal with problem “talkers,” read on.

“Talking” isn’t just an indulgent way of describing a cat’s meow – your British Shorthair really is trying to speak to you. The familiar cat’s meow is not a vocalisation that typically occurs in feral domestic cats. The natural vocalisations of a cat are hard for humans to hear; they’re pitched at a range above our normal frequency spectrum. We can hear our cats because they have developed the meow: a special sound produced largely for the benefit of humans, an attempt to generate something like human speech.

There’s a canard in circulation that the meow is an attempt to mimic a human infant, and thus persuade the human to adapt and “baby” the cat. This plays to a lot of unfair stereotypes – the idea that cats are duplicitous, tricksy; that they want to con us in some way. A more accurate version of events is that cats developed their mew in a special effort to be heard, to communicate with humans.

Small kittens are born making little squeaks and peeps rather than full-throated meows – they learn that from their mothers and from being around humans. Cats who are not exposed to human speech when they’re small often won’t meow. I fostered a British Shorthair mix once who’d spent his kittenhood as part of a semi-feral family of cats, completely neglected by their owner; his mother was able to meow but this cat could only manage a high-pitched squeak. Hearing this kittenish “Meep!” coming out of a hulking adult tom was incongruous and rather disarming.

The “meow” vocalisation is a social act. It’s hardly surprising that the most sociable of cats, the British Shorthair, would meow a lot. If Shorthairs are more vocal than other cats, it’s only because they want to talk to you. These chatty Cathies of the cat world are just trying to be understood.

Your British Shorthair may meow for a number of reasons: to say hello when you come in from outside, to get you to pay attention to her, to beg for a snack, to get you to open the door. Sometimes your cat’s meow can be a symptom of a health problem, which you’ll need to address with help from your vet.

Why does my British Shorthair meow at night?

If your furry friend is loud during the night, it can be down to simple boredom. Cats aren’t precisely nocturnal but they do tend to be more active at night than during the day. If your cat has been snoozing all day while you’re at work, an unfortunate consequence may be that she’s lively during the night hours when you need to get to sleep. She will then meow to get you to wake up and play. One way to deal with this is to set aside some time in the evening to play with her so that she’s properly tired out before bedtime. Another trick is to leave a toy or something she can play with, especially the puzzle toys that distribute small amounts of food.

Your cat may also be feeling insecure and lacking in affection; this is a distinct possibility if you’re not home much, especially if your schedule is irregular. Try to arrange to leave and come home at the same time every day. Again, making sure you spend plenty of time interacting with your British Shorthair can help. You might also consider having a friend or a pet-sitter come to visit during the day that your Shorthair doesn’t get lonely. They’re social and loving cats and may feel neglected if they don’t get the affection they crave. It’s important, though, that you avoid rewarding her for pestering you. Don’t jump up to play with your British Shorthair as soon as she starts meowing – wait till she’s quiet, then reward quietness with attention.

My British Shorthair meows for treats or to get outside.

If your British Shorthair is meowing for extra food, you first need to stop feeding her when she does it. Feed her at a set time every day and avoid giving her tidbits between meals. If your cat isn’t prone to weight issues, you might consider leaving a little dry food out for her to nibble on during the day so she won’t bother you for additional snacks. If she is prone to overeating, the aforementioned puzzle feeders may be a solution.

The same principle of rewarding quietness and ignoring meows applies to persistent demands to get in and out of the house – let your cat out when it’s convenient for you, not when she demands it (unless you’re not using an indoor litter-box, in which case you may just have to let her out when she asks). One reason that British Shorthairs meow to get out is when they’re in heat or her another cat who is. A cat who wants to find a mate tends to be both extremely vocal and extremely persistent.

How can I make sure my British Shorthair isn’t in distress?

If there’s no obvious cause for your pet’s meowing and yowling, the next step is to get your British Shorthair to the vet. This breed is remarkably hardy, long-lived and resilient, with few of the genetic conditions that can plague other pedigree cats. That said, every cat will get sick from time to time. Lots of conditions can cause your pet to become more vocal; if she’s in pain or physical discomfort, or simply feels out of sorts, she has no other way to let you know.

Something as simple as cystitis or a respiratory infection can make your pet more vocal and fussy than usual. These conditions may sometimes clear up by themselves but it’s best to check in with your vet to ensure that the problem doesn’t deteriorate. Your pet may need antibiotics or something else to relieve the symptoms. Injuries can cause excessive meowing and may be hard to detect without a proper examination, especially strains and sprains; keep an eye on your pet for a limping gait or signs of stiffness.

Sadly, constant meowing and yowling in an elderly British Shorthair may be a sign that your pet is coming to the end of her life. Felines get dementia and mental problems just like elderly humans, and when they do they can become very distressed. Your vet may be able to prescribe something to help her feel calmer and less confused.

British Shorthair reaches their full maturity at 4-5 years of age. However, most of the growth is achieved within the first 18 months.

How long do British shorthair cats live for?

British Shorthairs live for 14-20 years. The length of their life will depend on the environment, diet and individual condition of each cat. According to insurers, the average lifespan is estimated as 12 years.

What kind of cat is Garfield?

Grumpy, overweight and sarcastic cat? It must be a British Shorthair 🙂

If you're considering a pet, you really can't go wrong with a British Shorthair. These cats are not only ridiculously adorable to look at, with their thick fur and round, amiable faces; they're also...

Taking care of a British Shorthair is very much like taking care of any other cat. Independent, sturdy and good-natured, this breed is very easy to look after, only requiring one or two extra steps...