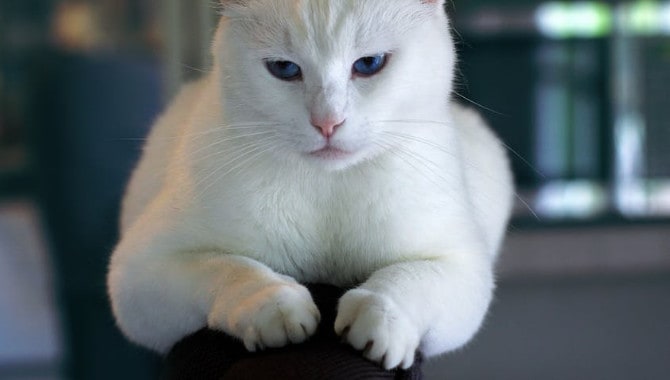 British Shorthairs Scratch Furniture?” width=”670″ height=”380″ />One of the most frequently asked questions by people who consider buying a cat is whether they scratch furniture. Luckily as a British Shorthair owner myself, I am able to shed some light on this matter…

Do British Shorthairs Scratch Furniture? Yes, scratching itself would definitely happen, as this is simply in cats nature regardless of the breed. They scratch in order to get rid of the dead outer layer of their claws, it’s how they prevent their claws from growing too long, mark their territory and stretch their bodies. However, cat owners can prevent furniture scratching by diverting cat attention to other, dedicated for that purpose objects.

A friend of mine was recently considering the idea of adopting a British Shorthair. There was a lovely pointed grey kitten in need of a good home… Encouraged by me and the fact that British Shorthairs are considered to be ideal for first-time owners, she was almost ready to say ‘yes’. However, there was one aspect to consider, about which she had considerable doubt. She collects antique furniture and has quite a few vintage pieces in her home. Eventually, she decided not to go ahead, as she didn’t want to risk her furniture to be damaged.

Why do cats scratch in the first place?

As I mentioned before, scratching is part of the cat’s nature, so before you close the door forever on the idea of having a cat, for this reason, you need to understand that it is not a symptom of their bad behaviour. British Shorthairs, in particular, are generally the most stable of cats and don’t behave in a destructive manner unless something is very wrong.

READ ALSO:
How Long Are British Shorthairs Pregnant For?

If you can discover the reason why a cat indulges in excessive scratching behaviour, you can avert a scratching fest -on your furniture at least. That way, you can have your vintage furniture and enjoy having a cat too.

House cats feel the same need to trim their claws as their feral cousins do. But while the outdoor cats have access to trees and stone surfaces, the house kitty is at a disadvantage. A scarcity of suitable surfaces can prompt them to try their claws on your furniture. If it’s an old piece which has seen better days and is ready for despatch at the next clear-out, no worries. But if it’s a valuable vintage cabinet… well, that’s another story.

Scratching Is Not Always Destructive.

Apart from the above, suggested urges resulting from their nature there are some other reasons for scratching… one being – cats simply enjoy the act of scratching, it amuses them. A ‘scratchable’ surface, like an upholstered piece of furniture, for example, can be pure joy. But there’s another reason for scratching… the cat who feels lonely and neglected is far more likely to do so. Therefore instead of focusing for ways to protect your furniture by buying a bunch of gadgets, make sure that you give your feline enough love & attention in the first place and only then look for other ways to avoid the damage.

How to avoid scratching catastrophe?

The first step would be to assure your cat that he is loved and safe, give him the attention that he needs. When that part is covered we can then think about protecting the pieces by placing, where possible, appropriate coverings on furniture which is likely to attract the cat. We can also limit Kitty’s activity to certain rooms which don’t contain vulnerable furniture. That’s often easier said than done though. Cats enjoy their freedom and don’t take kindly to having it curbed.

If your cat desire to scratch comes from the urge to keep her claws in shape, you can make other suitable surfaces available (more than better). Scratching posts and boards are available in pet shops. Most cats love them. They usually give the furniture amiss when there’s a fun item around to scratch. By the time your cat is finished with the scratch post or board, it’s often completely destroyed, but that takes time and at least your furniture will be safe. You should have a happy, contented pet and your possessions intact.

But what if your cat isn’t so happy? Cats who feel lonely and neglected because their owners are out too long can indulge in scratching furniture. The British Shorthair is an independent animal, but if the owner works long hours and frequently comes home late, there could be a problem. Worse still, if you sometimes stay out at night, the cat could become really upset. Cats appreciate routine and can generally tell the time. Disturbances in the routine can make them feel very insecure and this could manifest itself in excessive scratching.

What If The Cat Prefers My Furniture To The Toys?

That’s actually highly unlikely. When you provide your cat with enough attention, a variety of toys, with different scratching textures (multiple types of scratching posts) no cat is going to choose to scratch your furniture.

Trust me… healthy, happy, well-cared for cat rarely choose anything else. Many toys on the market today are so innovative and alluring. Many scratching boards include a hanging toy, which is a huge attraction for a curious cat, but those are available separately too if you need them. You may also attract the cat to the scratching post by spraying it with catnip…

When choosing scratching post a lot of people recommend the ones with sisal fabric instead of sisal rope. Although very popular fibres of the rope may become dislodged and may be quite sharp, what eventually may discourage your cat from continuing to use it. Having said that… that is not the case with my Frank, he absolutely adores them. Those and cardboard scratching toys (those are quite messy though) are the best fun for him.

To get the best possible toys for your cat, it’s worth exploring the pet shops in your area or online shops (where those are usually a lot cheaper). There’s a good variety of pet products on the market nowadays and most online stores will offer free and quick delivery.

I Work Irregular Hours. How Can I Prevent My British Shorthair From Feeling Lonely?

As I’ve already said, British Shorthairs are considered by many to be the ideal cat for a first-time owner. This is because they are so trouble-free. It doesn’t matter if you have a job and have to be out every day. Your British Shorthair will keep herself amused in your absence. She’ll wait patiently for your return. However, as I said, long hours and irregular patterns can upset even the most stable of cats. They may feel lonely and insecure. This can lead to destructive behaviours, such as scratching.

So if things are really hectic at work, how can you ensure that your feline stays happy and healthy? If you have a trustworthy friend, relative or neighbour, you could ask them to visit your cat for a while every day. This will keep your cat content until your hectic period is over. If there’s no friend or relative nearby, you could engage a cat or pet sitter to do this job for you. To keep your pet happy and healthy, it’s worth the expense involved.

Are British Shorthairs Less Likely To Scratch Than Other Breeds?

British Shorthair is a straightforward pet with very little demands. It’s one of the most independent of cats and highly intelligent. She’s practically self-entertaining. This makes her a popular choice of pet for people who live alone and even those who work full-time. But even most undemanding pets, if left alone for too long, can become feeling lonely. Think about this for a moment. In the wild, animals have the company of their own kind. Whether an animal is highly sociable or quiet, there’s always some company around. It’s true that the British Shorthair is more independent than most animals, but locking them up in a house or flat for long periods without the company could result in depression. This may manifest itself in some sort of destructive behaviour. Therefore in case if you going through some busier-than-usual phase of life, during those times, consider using pet-sitters.

How to divert the cat from scratching a carpet and encourage him to use a scratching post instead?

Place the post close to the damaged area and gently rub cat’s paws on the post in order to leave some scent on it and show what they should do with it. Try this several times especially when the post is brand new. If you discover that your cat is scratching in other areas, lure him to the post and repeat the action or purchase some extra posts and place them there.

Why cats scratch when you pet them?

Different cats react to human petting differently. Some would absolutely love it and they will never be bored of this (Ragdoll seem to be a great example here), but some simply won’t tolerate it, as they prefer other ways of human affection. British Shorthair, for example, will never happily lie on a lap and while he enjoys some form of tickling from time to time- everything seems to be based on their rules, demands and exactly at the moment when they require and not any second longer. If you exceed a time… they will send you a warning and if you ignore it they may bite or scratch you, so you need to pay attention.