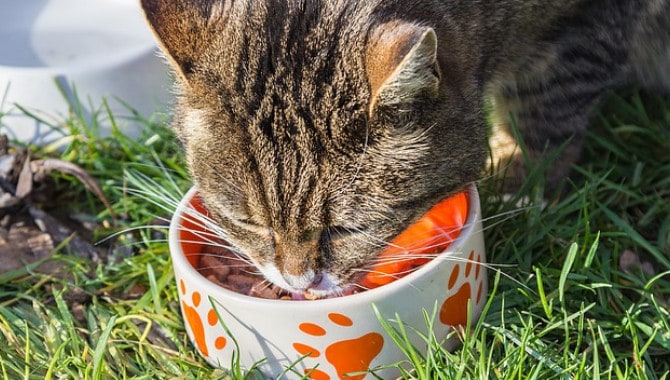 Getting a new British Shorthair kitten is an exciting moment. Your new feline companion is probably playful and rambunctious, scampering around your home and getting into all kinds of adorable mischief. In this article, we’ll look at the best way to feed your young British Shorthair to give her the very best start in life.

How much should a British Shorthair kitten eat? In short, as much as she wants whenever she wants. You should be feeding her between three and five small meals per day (around half a pouch of wet food per meal). This will give her the nutrition and energy she needs for all that running around, as well as for her development into a big, healthy adult later on. British Shorthair kittens are vanishingly unlikely to become obese at this stage in their lives so let her eat when she likes.

You’re probably thrilled to have found your new British Shorthair kitten, and maybe just a little nervous, too. That’s normal; this page can help, by answering many of the common questions a new kitten owner may have about their pet. How much food should a kitten eat? Does a kitten need any kind of special diet? Are some foods unsafe? How can you make sure your kitten is getting all the nourishment she needs to become a robust, healthy adult? To find out all this and more, keep reading.

Table of contents: show
Feeding your kitten: what, when and how much?
Are there any foods my kitten shouldn’t eat?
When should I start to rein in my cat’s eating?
My British Shorthair kitten won’t eat! What should I do?

Feeding your kitten: what, when and how much?

How much should a British Shorthair kitten eat? Plenty! British Shorthair cats are famous for their healthy appetites. They are good eaters, seldom picky and usually willing to eat whatever you put in front of them.

READ ALSO:
Why Do Cats Meow Back At You?

As this breed of cat gets older they can develop weight problems and you may need to manage their food more carefully, but it’s practically impossible to overfeed a British Shorthair kitten. They tend to be energetic little fuzzballs, happily burning off any extra calories with their playful antics.

By the time a British Shorthair kitten comes to you, she should be at least 12 weeks old and fully able to enjoy the same kinds of foods as an adult cat. There are “specially formulated” kitten foods on the market; while these certainly won’t do your British Shorthair kitten any harm, it’s my opinion that they’re little more than a marketing gimmick.

There is some dispute among cat fanciers but as far as I can see the ingredients aren’t really any different to those found in standard adult cat foods. They’re simply repackaged with a kitten on the front to justify a higher price point. In nature, a feral kitten would live on her mother’s milk until weaning and then graduate directly to a diet of small animals, birds and the odd fish; “kitten food” wouldn’t enter into the equation. 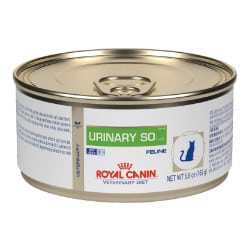 What really matters is the quality of her food. You need to choose a good cat food with plenty of protein and very few carbohydrates. Look for brands that are free of grains and potato starch; these provide nothing a cat needs and deliver only empty calories. While this isn’t too terrible for an energetic kitten, you don’t want her getting a taste for what amounts to feline junk food. My personal favourite is the Royal Canin Urinary Pro – not only this is a quality wet food but also designed especially for cats with tendencies to urinary tract infections (ideal for BSH).

When a British Shorthair outgrows the fast-moving, playful kitten stage and becomes more laid-back, she can develop weight problems that aren’t ideal for her health. Grains and potatoes can also upset her tummy and may cause digestive problems later on. Choose a brand that is transparent about its ingredients, including named meat. (“Such-and-such flavoured” doesn’t count – check the label and make sure you know what’s in it.)

Find a brand that includes taurine (Royal Canin Pro), since cats need these in their diets – taurine deficiency can damage a cat’s eyesight. Feed your kitten little and often (about half a pouch of wet food, three to five times daily) making sure to clean out her bowl between meals. She’ll let you know when she’s hungry, British Shorthairs are very clear on this matter and won’t hesitate to keep you fully updated. As she gets bigger, you can feed her larger meals less frequently.

Are there any foods my kitten shouldn’t eat?

There are several foods that you should avoid giving your British Shorthair, both now and when she grows up. Milk is the biggest no-no. Giving a kitten a saucer of milk might seem the most natural thing in the world but it’s very bad for this breed.

A reputable breeder won’t part with a kitten until 12 weeks or older. By this age your kitten will already have been weaned, that means she’ll have lost the enzyme that allows her to digest lactose. Milk will upset her stomach and may make her sick.

In general, avoid giving “people food” to your British Shorthair as many common foods are very bad for cats; if you feed her from your plate you’ll also get her into the habit of begging for scraps, which can be a problem if she runs to fat later in life. As previously mentioned, don’t give her cat foods containing grain or potato. You should also avoid feeding her too much beef or fish; beef can provoke allergies in cats while fish can be high in mercury. Raw fish may destroy thiamine in the kitten’s system.

Avoid letting her eat cat food that’s been standing out for more than a couple of hours. Rancid cat food is dangerous for her developing immune system so wash the bowl after meals and dispose of uneaten food, giving her a smaller portion next time. Only offer small amounts of dry food, if any, too little moisture in a cat’s diet can cause dehydration and kidney issues, which goes double for kittens.

Make sure she has easy access to fresh, clean water at all times. Give food and water in a ceramic dish, not plastic — plastic gets scratched and harbours germs. When she’s big enough to use one, get her a kitty water fountain to encourage drinking.

When should I start to rein in my cat’s eating?

Once your kitten has grown up a bit, you can safely amend her feeding schedule. By five or six months old she should be able to drop from five feedings to three or four. By seven or eight months you can feed her two to three times a day. Once she’s safely past the one-year mark, two meals should be sufficient. Bear in mind that this is just a rough guideline, some cats will want more, some cats less.

You should also remember that the British Shorthair is a slow-growing breed; your kitten won’t attain her full adult size until she’s around three years old. Until then, you probably don’t need to worry too much about her weight. Just feed her when she tells you she’s hungry and makes sure she has plenty of water.

British Shorthairs are rather notorious for overeating and getting husky but this is seldom an issue in very young cats. What they don’t burn off simply through growing they’ll burn off running around your home and knocking things over. I’ve seen plenty of very fat British Shorthairs but none under the age of five or six. Younger models are simply too busy playing and chasing imaginary mice to gain weight. Keep an eye on your cat’s development but don’t worry too much until she starts getting old and lazy.

My British Shorthair kitten won’t eat! What should I do?

Kittens need a lot of nutrition. If your young British Shorthair goes for more than a day without eating you should seek medical advice, especially if she’s not drinking either. If your kitten is only eating a small amount of her food, it could just be that’s all she’s got the room for. Amend her portions accordingly and feed her more often to compensate.

READ ALSO:
What Do Cat Fleas Look Like To The Human Eye? Do I Need A Fleas Pest Control? [SOLVED]

Although this breed is rarely picky about food (quite the reverse), it may also be that she doesn’t find the brand you’re giving her to be palatable. Try switching brands or trying a different flavour. My experience has been that British Shorthairs are partial to poultry flavours so you might try chicken or duck if she won’t eat rabbit.

The breeder who you bought her from will probably be happy to help advise you; find out what she was eating before she came to you. You may feel that you’re spoiling her something I’d usually advise against, but at this stage in her growth nutrition is critical. It’s not the time for a battle of wills over her preferred cat food.

As I mentioned previously you should always make sure her dish is clean; you should also wipe the floor and change whatever the bowl is resting on. Rancid smells from previous feedings may put her off her food. If there are other pets in the house with your kitten, make sure they’re not muscling in and scaring her away from the food. The reverse situation is also possible; some kittens are cheeky enough to steal food, either food from other pets or human food that’s been left where they can get at it, then turn their noses up at their own cat food. Keep an eye on your British Shorthair to see if she’s making stealthy raids on the bin or the dog’s bowl.