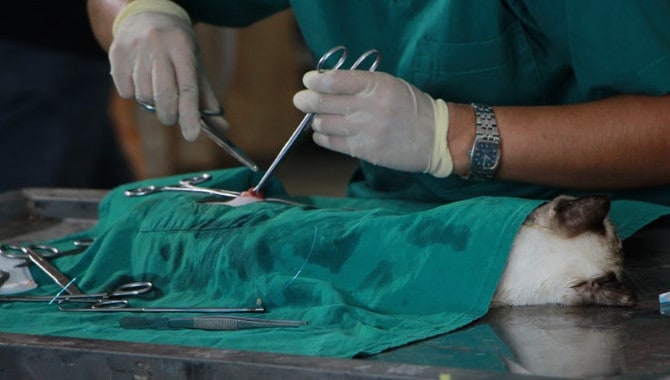 There’s a certain amount of debate over when you should neuter your British Shorthair cat. (Technically neutering applies to both male and female kittens but it’s usually used to refer to a gonadectomy in the male, so that’s what we’ll discuss here). Some people, including many vets, encourage owners to neuter their British Shorthairs as early as possible. Others, mostly breeders, insist on neutering as late as possible. What everyone agrees on is that neutering and spaying your cats is an important part of being a responsible pet owner.

When to neuter a British Shorthair cat? You should neuter your British Shorthair cat between four and six months old. This gives the cat time to mature physically but doesn’t encourage the development of undesirable male cat traits, such as fighting, spraying or unsociability. It also promotes better health.

Let’s find out more about British Shorthairs and neutering. If you worry that neutering your male kittens too early will prevent them from acquiring that coveted British Shorthair physique, or that if you leave it too late you’ll ruin their friendly character, read on to discover more.

READ ALSO:
Why Does My Cat Meow After Eating?

Let’s take a look at some of the factors involved in this decision. One factor that often comes up is the shorthair cat’s slow growth rate. It’s true that the British Shorthair is one of the slowest-maturing cats, it takes roughly three years for a British Shorthair to grow into their full adult size. Once grown, the breed shows an unusual degree of sexual dimorphism; male British Shorthairs are typically a couple of pounds heavier than females.

The fear some people have regarding early neutering is that their male shorthair won’t gain the chunky, heavy-set build that British Shorthair boys are noted for. This fear can easily be allayed, however. Male kittens carry own growing well after neutering. Nothing about the operation will stunt your young cat’s growth, he’ll still grow up into the kind of strapping fellow that the British Shorthair breed tends to produce, complete with all his pedigree features. It’s true that early-neutered males won’t acquire the 100% jowly look associated with an “entire tom” but this is not really very important. In any case, those jowls are a temporary feature and would disappear after neutering.

This is true whatever age the cat has attained before the operation. The heavy jowls are not something that will endure once the supply of testosterone is gone, slowly vanishing over the months following neutering. Your British Shorthair tom will arguably look more handsome without a heavy-jowled look, as this can detract from the charmingly rounded facial features this breed is so loved for.

Another beloved trait may also disappear if you wait too long to neuter: the breed’s famously enthusiastic friendliness. Testosterone in male cats has some untoward effects, over and above the rather notorious territorial marking. These include aggression and anti-social behaviours. One of the nicest female, you really can’t ask for a more convivial pet.

A male British Shorthair who is neutered too late in his development may turn from a lively companion into something more like a surly teenaged lout. he one difficult characteristic that British Shorthair toms can develop is a degree of laziness, which can lead to cardiac issues and weight problems as the cat gets older. This is true of any neutered male cat but this breed, in particular, gets very sedentary if you don’t intervene.

You can address this trait by ensuring that he gets plenty of active play, British Shorthairs absolutely love playtime and watching his diet. As long as he gets some encouragement to run around a little and isn’t overfed, your tomcat should be fine.

What happens if I neuter my British Shorthair too late?

Let’s look in more detail at some of the issues involved with looking after an un-neutered male British Shorthair. One of the most frequent complaints of owners is that their tom now persists in marking his territory  (spraying) which includes their furnishings and fixtures. Un-neutered males produce an unpleasantly pungent oily spray for this purpose, in addition to urine. (Yes, the male cat will also deposit this everywhere; it’s rather dreadful to clean up, too.)

The un-neutered British Shorthair is likely to become much less amiable, possibly rejecting human companionship altogether. This can be a serious problem whether you keep your short hair as an indoor or outdoor pet. The male cat has a tendency to roam, which may end up with him getting lost or hurt if he’s allowed outdoors. If you try to keep him indoors, however, you may find yourself sharing your home with a frustrated animal who now regards you as a threat or a rival. This can become a miserable situation for both you and the cat.

READ ALSO:
Can You Eat Food Your Cat Licked?

If you have other pets in the house, especially other cats, they can find themselves in the firing line. An angry territorial male isn’t just a nuisance for them — he can be a very real physical threat, capable of inflicting serious injury. I have met un-neutered British Shorthair males who didn’t fare too badly – some breeder friends of mine have a very good-natured stud tom who likes to trundle around the house bestowing friendly head-butts to everybody’s shins and is perfectly affable toward their other cats, but I’ve met some absolute terrors, too.

One woman I know had to rehome her Shorthair when he wouldn’t stop pouncing on her from above. On the whole, unless you’re planning to breed from your male British Shorthair, it’s best not to wait beyond the six-month mark.

What if I neuter my British Shorthair too early?

It’s true that very young kittens should not be neutered. The animal should weigh at least two pounds; a British Shorthair should get there between four and eight weeks of age. Some people do feel that this is too young, raising the spectre of urinary tract infections, stunted growth and proneness to hiding or shyness, but current research shows that early neutering can actually be easier in terms of the animal’s health and prevents behavioural issues rather than creating them. In any case, your vet is unlikely to perform such an operation too early; they know what they’re doing.

If you’re hoping to adopt out the kitten in question, early neutering is a good idea, people generally prefer to adopt younger kittens and they’re more likely to take on a British Shorthair who’s been neutered and had all his shots. If you’re keeping the kitten, you can safely wait until the six-month mark if you wish. Don’t leave it any longer, however. After that point, your male cat is apt to develop some of those difficult traits; he’s unlikely to lose all of them even when you finally get him fixed.

When should I spay my female British Shorthair kitten?

This is a less hotly debated topic, as female British Shorthairs tend to be less blocky anyway and don’t acquire the heavy features of their brothers. I would say get your queen kitten spayed at four weeks or as soon as your vet thinks she’s ready. Here the six-month mark definitely does not apply, as your cat can get pregnant well before then. Female cats can come into their first heat as early as four and a half months; I’ve heard anecdotes about cats getting pregnant earlier, but this is disputed.

Unlike spaying, an early litter of kittens really will stunt the poor girl’s growth. The developing kittens take nutrients away from the still-growing mother and can stop her own growth in its tracks. The result is an undersized female with a sad tendency to health problems. If you plan to breed from her, it’s imperative that you keep your female kitten away from any un-neutered males. This includes her littermates.

If you have male cats in the house you will need to get them fixed, while your young female will have to become an indoor cat. Dealing with an unhappy female in heat can be difficult, as she will take any opportunity to bolt, but you will both have to deal with the frustration as best you can. There are feline birth control pills, but opinion is divided over safety and effectiveness. If your girl is healthy, she should be okay to become pregnant at one year.

READ ALSO:
How long can a mother cat be away from her kittens?