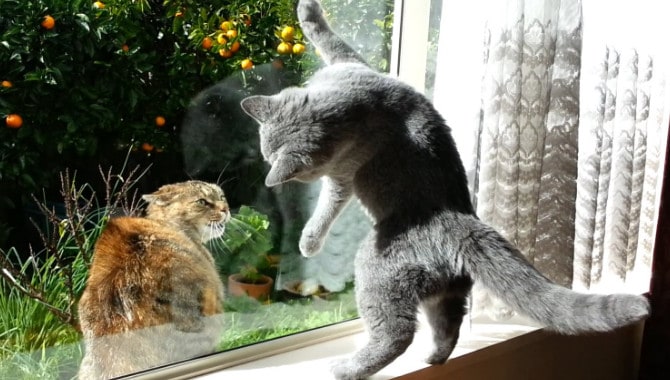 I have been intending for some time now to add two more cats to our family. I was curious if British Shorthairs are cats friendly, so I was determined to gather some information online and from some friends and family who already have more than one cat…

What is worth noting, is that British Shorthairs are friendly and pretty adjustable not only to their own kind but also to other pets – all with the common sense of course! Don’t ever think they will not take notice or even action to the likes of a fish or a bird… In their minds, that is still a prey, and so they will attempt to treat it for what it is for them.

First of all, despite general sociability of British Shorthairs you always need to keep in mind that every cat is somewhat different and so it may react to new circumstances differently.
Some cats love a company, and they may embrace a new friend, others may quickly look for a safe hiding place and naturally there is also a risk of direct attack.

Let us not forget that BSH (British Shorthairs) like to keep some distance… do you remember that quote from Garfield “It’s not that I dislike you, I just don’t like you near me” That may easily apply to both – people & fellow species and more…

What may determine British Shorthairs friendliness:

Even though British Shorthairs are typically amicable towards other cats, it is rarely immediate. They just won’t embrace another cat instantly (I would be highly surprised if they would). Cats, in general, are quite territorial and even though British Shorthairs are not like most cats (in my opinion at least!) still their first instinct is to defend their district! It is always a process so it will take some time to work out the “power structure”, and specific steps should be considered in advance to make it a bit easier.

The friendliness will also most likely depend on the age and gender of another cat. Typically it could be a bit easier to introduce a kitten to your current cat then to another adult cat, since their competitiveness may be less developed and usually adult boys getting along quicker with grown-up girls than with another boy.

There are some steps to be taken before direct introduction:

Very important – despite some similarities cats are not like people and what sometimes works for us will not work for them, so if you were tempted to just throw them into deep water and hope for the best – FORGET IT! It just won’t work. That goes for both – your current and new cat. It should always be gradual, so you absolutely need to take steps to introduce them.

Keeping new and your existing cat in a separate room at the beginning is essential, so they both can get used to the new environment and become familiar with the each other sent, sounds first then side and at the very end we can allow them to interact with each other. Important not miss or skip any of these steps. There is a reason why exactly it should happen in this order. Also, you need to consider that there are different methods for kittens and different in the case of adult cats. When introducing a kitten, a lot of vets, breeders etc. advising the use of pet pen…

If you were ever wondering however if your cat will be OK with just any cat and whether it would be possible to arrange from time to time “playdates” with fellow cat owners like dog owners sometimes do… well, that may not be a great idea after all. Most cats are likely to see the whole situation as a threat. Cats who mainly played with humans their entire lives are not necessarily going to be happy to interact with another cat, they may just not know how, even if the introduction goes well – meaning if they will not jump to each other throats right away.

There are exceptions of course… I have two sisters – also cat owners; thanks to me:) and their 3 cats getting along very well most of the time even after not seeing each other for long periods of time. Occasionally one of them will show his dissatisfaction for whatever reason, but nothing major, there is no big drama, and mostly I am ending up watching funny videos of all three having a blast.
So, whatever you decide you must be aware that there is a risk of failure and if so you must act quickly…

British Shorthairs… one or two?

British Shorthairs are perceived as the ones who are perfectly capable of staying on their own. They usually free from separation anxiety and they will find a way to take care of themselves and even manage to keep your furniture intact. Having said that getting more than one can be actually beneficial, as there is a chance for a more active way of spending time. Since British shorthairs and any other indoor/neutered cats have tendencies to gain some weight more fun and playful exercise won’t harm.

When I was buying my first (his name is Frank by the way), I remember people advising me to buy two at the same time from the same litter. The reason is that, as they were not separated they will have an already great bond and will remain more active and playful. At that time I wasn’t convinced – well I didn’t know any better, but now I know it was a mistake. Therefore if you have the right conditions and you can afford it, this option is really worth exploring…

So, there you go… the conclusion is that British Shorthairs are cat-friendly creatures in general, but of course, you need to always keep in mind that ultimately every cat has a unique personality and so may react differently.

How are British Shorthairs with children?

British Shorthairs are getting along with the children exceptionally well even though they don’t like to be picked up or be held. BSH’s are very patient, and if they don’t appreciate at some point the direction in which the “fun with kids” is going, they will simply leave the room. Of course, you should still teach your children to interact with your cat, and any other pet for that matter, in the gentle, caring and kind manner.

What is the British Shorthairs personality?

British Shorthairs are easy-going, undemanding, affectionate cat yet they are quite reserved. They will not sit on your lap, but they like being close to their owner, and they can be very devoted. They are mild-mannered, quiet, but not very active and they love to observe everything that is going on in their surroundings.

What are the most common British Shorthair Colours?

There can be many different coat colours including:

Regardless of the actual colour of the coat, they are all short, very thick and dense.

What is the British Shorthair lifespan?

On average British Shorthairs are long-lived cats, with a life expectancy between 14–20 years. However, many factors may have an impact on this – mainly the way how they are taken care of: diet, regular vet visits, grooming etc.

What is the cost of British shorthair cat?

You can buy British Shorthair from £300 to £900 on average ($500 – $1500). As you can see the prices of British Shorthair kittens are very diverse. This would mainly depend on actual location, your choice of the breeder and whether or not they are Pedigree Kittens. When it comes to costs of setting up everything, as you can imagine this also vary, but you are able to find an affordable litter box, scratching posts etc. After that, it is not more expensive than any other favourite, domestic pet.