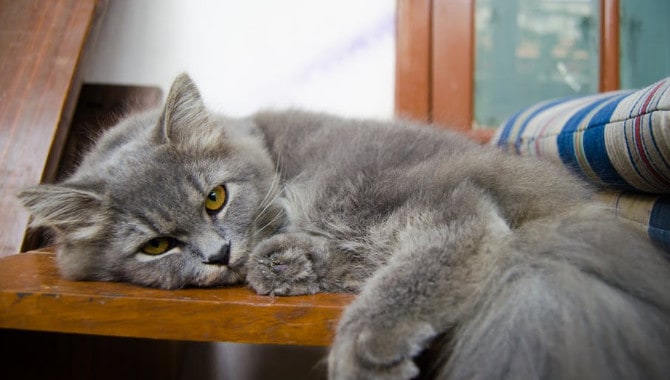 A friend of mine was recently planning to adopt a British Shorthair from a local shelter. She’d seen the cat while visiting with her sister, who was picking up her own rescue cat. My friend was immediately smitten with the placid, amiable shorthair and began considering the logistics of adopting him. The only snag was that my friend works during the day; she’d heard that British Shorthairs tend to pine and become depressed if they’re left alone too much. Would it be fair of her to bring this cat home when she was out all day?

Can British Shorthair Cats Be Left Alone? Yes, British Shorthair cats are strong and independent, they will handle short-term (1-3 days) loneliness better than other breeds. In case of longer periods (5-14 days) arrange a cat sitter service or a friend who can visit your cat every day.

No matter how for how long you will be away, you must provide your cats with regular, meals and fresh water. I found that automatic feeders and waterers are the answer here, and you can buy a feeder from Chewy for anything between $50-$120 – depending on how fancy you want to get. One thing is sure – you (or your cat) will not regret it.

British Shorthair cats are a popular breed, especially well-suited for first-time pet owners. I have to admit some bias here — my first cat was a British Shorthair and I’ve loved them ever since. They have few genetic health issues and their short hair makes them easy to groom and care for. They’re also very stable emotionally and tend to be fairly even-tempered. Cat-lover lore holds that British Shorthairs become depressed if left alone too often. Is this true, however? To answer this question, we need to delve a little into cat psychology.

The popular feline stereotype is of an aloof loner, a creature that rejoices in splendid isolation — quite unlike the dog, who’s supposedly a more convivial pack animal. In fact, this is unfair. Feral cats in the wild don’t lead solitary lives. For preference, they form loose collective groups with social dynamics as complex as any pack animals. The domestic cat is in many ways similar to some of her larger relatives in the wild; lions, for instance, don’t live alone but form prides where many individuals occupy a particular territory. Cats, then, are not indifferent to companionship. They form loving attachments to their fellow cats, as well as to other animals and humans.

Like humans, cats exist on a spectrum of sociability. A lively extrovert may enjoy a giddy social whirl with lots of company and plenty of interaction, while a quiet introvert may be happiest in a quiet environment with one or two close friends. It’s the same with cats — there’s a great deal of variation, even within a particular breed. In general, though, it’s safe to assume that a cat will want your company (even if they express affection in ways that you don’t immediately recognise). Although cats tend to be fiercely independent creatures, they still need the reassurance and comfort provided by a familiar presence.

This brings us to the British Shorthair specifically. Out of all the popular cat breeds, this is one of the most level-headed and free from neuroses. The archetypal British Shorthair is stolid, patient and slow to become emotionally disturbed. Where other cats might get worked up and distressed, this breed tends to be stoical and not easily ruffled. Despite their independent nature, though, British Shorthairs are still affectionate. They love human companionship and usually enjoy physical contact: grooming, petting and stroking are usually well-received. They tend not to act out when upset, instead of becoming withdrawn and prone to ill-health.

READ ALSO:
Why Is My Cat Purring So Loudly?

Like most cats, British Shorthairs are sensitive to the routine. I’ve heard people dismiss this idea on the grounds that cats can’t distinguish time; in fact, they often have a good sense of time and learn routines easily. I’ve known felines who knew their mealtimes down to the half-hour and one who would come out to wait by the top of my street when it was time for me to come home from school. Like most cats, British shorthairs handle being left alone much better if they can be reasonably sure you’ll return at roughly the same time each day. It’s true that having company or supervision throughout the day is ideal but most cats won’t suffer unduly if their human has a day job. Many, many loving cat owners leave their furry friends to snooze the day away while they go out to work, with no ill-effects.

Problems may arise, however, if your work schedule is erratic or if you’re frequently away for one or more nights. If your cat is alone for very long periods or doesn’t know when you might come back, anxiety and depression can be the result. If you’re going to be away a lot or often have to work overtime, consider arranging for someone to stop by once a day to check in and make sure your cat is doing okay.

How to tell if your British Shorthair is becoming depressed?

Cats have ways of communicating when they’re unhappy. A British Shorthair that feels insecure or neglected may let you know in one or more of the following ways:

How to help your British Shorthair?

If you frequently need to be away from home, consider arranging for a cat-sitter to keep your pet entertained and cared for emotionally. Even a short visit can help your British Shorthair feel more secure. Providing your pet with plenty of toys can also help a lot. British Shorthairs are generally quite intelligent and happy to distract themselves with whatever games and toys they can devise. Cat trees, stuffed chew toys or more complex games such as puzzles with a treat as a reward can help your feline friend stay happy while you’re out at work. Another option is simply to provide your pet with a feline companion, whether another British Shorthair or a similarly level-headed breed. This type of cat generally gets along with other pets reasonably well, although whenever you place two or more cats together there is a risk of friction between them.

Based on my own experience of the breed, I was pretty sure that my friend’s shorthair would be fine. He’s now a happy and contented solo cat. My friend’s work hours are regular so there’s no disruption of the cat’s routine. She did recruit a cat-sitter during his early kittenhood, just to make sure he had enough supervision. Soon he was big and independent enough to leave on his own; for a few weeks, my friend popped home at lunchtime to check on him and invariably found him asleep. A well-adjusted British Shorthair should be similarly contented as long as you come and go on a regular schedule and they get plenty of attention while you’re home.

Can British Shorthair cats go outside?

Yes, you can allow your cat to go outside as long as it’s a safe a gated environment. British Shorthairs are in general indoor cats but will enjoy occasional time outside. This will help with their physical and mental health, as they will run more, exploring everything around.

No, British Shorthairs are not typical lap cats – they like your company and occasional cuddle bet they rather stay in a short distance. They also do not like to be picked up.

How to take care of British Shorthair cats?

British Shorthairs are low maintenance cats. You will have to follow the correct diet, groom them at least once a week and make sure to visit a vet regularly. Other than this spend as much time as possible playing with your cat.