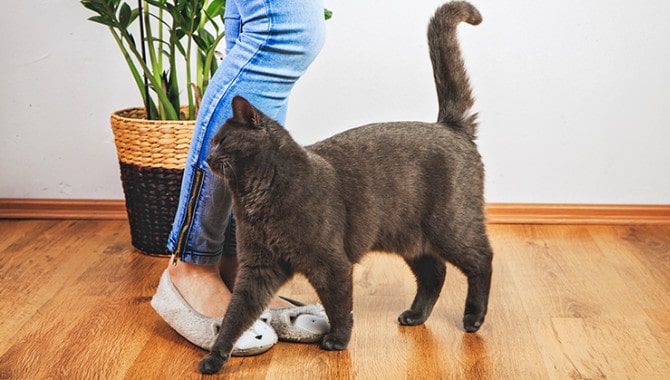 I am already a happy owner of one British Shorthair boy, and I am about to get 2 more soon, so I already know the answer, but if you are at the stage of the research now – here it is…

So, do British Shorthair males spray? Yes, males and females Shorthairs can spray if not neutered. This is how they will mark their territory in order to show their dominance.  Marking territory is simply in all cats nature – they claim a specific spot by leaving their scent. Quite often it is done through simple rubbing or scratching, but issues with urinating can also happen.

Table of contents: show
What cat spraying even mean?
Why cats spray?
When do cats start spraying?
Are there any ways to prevent cat spraying?
Neutering:
Cleaning the sprayed areas:
Medication/Supplements:
Feliway:
Frequently asked questions:
Do cats mark their territory with poop?
Other ways to mark the territory:
Do British Shorthairs get bigger after being neutered?
Do British Shorthairs personality change after being neutered?

What cat spraying even mean?

Spraying is happening when cat retracts to a vertical surface with the shaking tail and then urine, while regular urination occurs when they squat and pee on any flat area.

One of the reasons why cats are spraying is because this is their attempt to mark their territory. As I mentioned earlier, they have this instinct to leave their scent and sadly for their owners some cats may choose to leave their urine…

The reason for spraying may also be related to bringing a new cat to the household. Your current cat may feel a bit threatened and jealous, he wants you to think that new cat is naughty and in the way does not deserve the same amount of affection from you.

Adding a new cat is only one of many stressful situations for your puss that may cause spraying. This can also be a newborn, strangers in the house, unfamiliar sounds or even small things, that you or I would not even notice, but it makes the cat feel insecure…

Of course, I cannot discuss spraying without mentioning medical reasons that may cause it.
That is actually most common when they suffer for urinary tract infection or even blockage. After several attempts to make a wee in the litter box and being in pain, they are starting to identify litter box with tremendous discomfort and ache, what prompts them to “try” different places. I actually went through it with Frank, but being bright as he is, in order to let me know something is wrong, he literally cried in front of me, and was leading me to the bathroom where he tried to urinate in the sink…

So, as you can see it is essential not to assume that your little one does it out of spite! I cannot stress this enough! Urinary tract problems are not only painful for them, but they can also actually be fatal – If blocked a cat can die within hours. Urinary tract problems don’t go away by themselves, so if you notice anything suspicious, you must act and visit your vet immediately!

When do cats start spraying?

Most cats begin to spray approximately around 6 to 7 months of age. This is why a lot of veterinarians recommend cats to be neutered as soon as they reach physical maturity – typically between 4 and 6 months of age.

Are there any ways to prevent cat spraying?

The most commonly discussed method of preventing cat spraying is neutering, which is a surgical procedure carried out by a veterinarian under anaesthetic. When it should be done depends on whether the cat will be indoor or outdoor.

Research suggests that neutering an indoor cat should take place when they are around 6 months old, or even earlier if there are any signs of sexual maturity. In case of outdoor cats, you can wait a bit longer, although it is vital not to allow them to go outside before procedure takes place…

The best if you discuss with your vet when to do it, as some cat mature quicker than others, but if the neutering is done too soon you cat may not evolve to his full potential, and in the case of British Shorthairs there is a risk of not developing the lovely jowls that are so characteristic to them.

Please be aware, that even though neutering often eliminates this sort of behaviour, it is not a 100% guarantee. Neutered cats spraying indoor is less common, but they still may spray outdoor to mark their territory. It may also be happening when you are bringing a new cat, who is challenging the authority of the existing cat – then despite neutering, natural instinct kicks in, to confirm who is the boss around here. 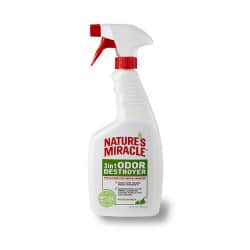 You need to clean the affected area properly, but it is important not to use strong chemicals, as the significant smell may cause your cat to “over-mark” the spot. I would suggest using Stain and odor remover like this one on Chewy.

You can also consider medication to solve the problem. There are plenty on the market, but please consult it with your veterinarian first. 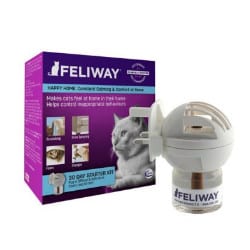 This is something that my vet recommended to ease the stress when I moved to a new apartment, and Frank was a bit anxious. It helped a lot, so if that is stress what causing spraying, I would suggest to try it. You can either buy a plugin or spray – I usually go for a plugin, as it’s more cost effective – check here for price. The only exception when I use spray is when I travel with Frank by car to the vet (3 minutes drive make him quite unhappy).

Some people suggest restricting the access to doors and windows through which cats may observe or sense animals outside, that may cause them anxious… I would advise that only if you entirely sure that is the case. My Frank for example as most of the cats absolutely love sitting by the window and observe so I cannot imagine depriving him of this pleasure. I actually firmly believe that it makes him very relaxed. I actually often join him in those observations, and I consider it as our bonding time…

Do cats mark their territory with poop?

Unfortunately, cats have a long history of using both their urine and faeces to mark their territory. Just another way to show the world who is the most important here.

Other ways to mark the territory:

Do British Shorthairs get bigger after being neutered?

Typically both male and female cats have a tendency to gain some weight after neutering/spaying as their metabolism slows down. Usually body fat starts to concentrates around belly… Putting some weight on is the reason why it is worth to consider specially designed food for those cats, who went through the procedure and make sure they have some exercise/play time.

Do British Shorthairs personality change after being neutered?

It is quite common that a lot of cats are less active after the procedure and as mentioned earlier the most common advantage is that spraying of urine stops or if done early never actually occurs in the first place.
From my own experience, I noticed that after Frank got neutered he became less cuddly – before he slept every night cuddled next to me. But I am not sure whether it was associated with the procedure or the fact that he became more like other British Shorthairs – a bit distant…