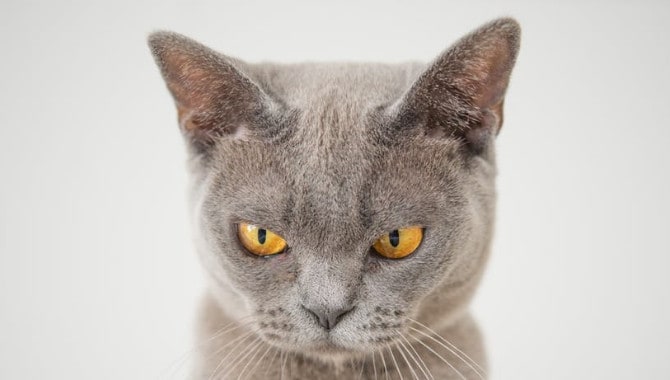 British Shorthairs are, in my opinion, just about the most handsome cats out there by a mile; I love their solid cobby bodies, blunt ears and wonderful round soccer-ball heads. They are a real cat lover’s cat, all the most charming feline traits in a gloriously plush bundle, while mercifully free of the health issues that plague some other pedigree breeds.

Are British Shorthair cats brachycephalic? Yes, somewhat: they have a round head and a cute turned-up nose. That said, however, the brachycephaly of the British Shorthair is less extreme than in a Persian (for example). The breed is not sickly or prone to the breathing difficulties and other issues associated with a more pronounced flattening of the face.

You’ve found this page because as a caring owner or owner-to-be, you have questions about British Shorthairs and their well-being. Read on to find the answers. What does being brachycephalic mean for a cat’s health? Can the foreshortened skull of the British Shorthair cause any issues? What health problems, if any, does this breed suffer from? To find out more, just stay tuned.

The long and short of brachycephaly in cats

READ ALSO:
How to Stop Cat Peeing On Dog Bed

The reason people usually ask me about this is that they own or are considering buying a British Shorthair and, as responsible cat-lovers, they don’t want to encourage the breeding of congenitally unhealthy animals. This is a very reasonable and even laudable position to take, although wading into the ethical quagmire that is pedigree cat breeding would take us outside the scope of this article. (The world of cat fanciers is a complex one.) At any rate, I can absolutely assure the reader that in buying a British Shorthair kitten, they are not supporting the creation of doomed and sickly animals.

In point of fact, the reverse is true: British Shorthairs are some of the most ridiculously healthy cats around. It is true that the breed has one or two health issues that run in the bloodline but it should be stressed that these are very, very rare. Your British Shorthair should live a long, healthy, happy life. They do not suffer from breathing problems or chronic eye infections; they’re sturdy little beasts with cheerful, amiable characters, who enjoy their lives to the full.

If you buy your British Shorthair kitten from a reputable breeder she will probably have fewer genetic and health conditions than the average random domestic cat. Breeders take their dams and stud boys out of circulation if they’re carrying something that could adversely affect the kittens’ health; they also take the greatest care to ensure that any kittens they sell are healthy, dewormed and properly vaccinated before they go out into the world.

READ ALSO:
When To Neuter A 🐈 British Shorthair Cat?

Why is brachycephaly a problem?

Generally speaking, brachycephaly should present absolutely no health issues provided it is not too extreme. A degree of brachycephaly may arise naturally in any animal as a quirk of genetics and typically does no harm. In animals where very dramatic brachycephaly is present, sadly, you can find a lot of health issues. In cats, one obvious example is the Persian. I love Persians, with their long, fluffy fur and quirky personalities, but I would probably avoid owning one because of their increasingly well-known issues.

Outside of the world of cats, we see similar problems in the brachycephalic pug. Again, they’re adorable, but their extremely shortened skulls can make life very uncomfortable for these pups. Over decades and sometimes centuries of breeding, brachycephaly in “flat-faced” breeds like Persians, Exotic Shorthairs, Himalayans and others has become very pronounced. While the animals may look cute they do have real problems: breathing issues are the most obvious, with eye inflammation and difficulty eating also cropping up.

Many “flat-faced” cats develop skin infections because the folds around their noses and mouths are impossible to keep clean. Some individuals develop skin problems elsewhere on their bodies because they can’t groom properly. In all my years of being a British Shorthair fan, however, I have never met one who was brachycephalic enough to develop any of these issues. Their tear-ducts are not shortened so their eyes don’t become infected and inflamed; their noses are not flattened or kinked so they breathe easily; they do need a good brushing once a week but otherwise have no problem in keeping themselves clean and well-groomed. As for problems eating… I have never, ever met a British Shorthair who had any difficulty with that. Trying to stop them eating you out of house and home is a rather more likely scenario.

Will my British Shorthair suffer from ill-health or die young?

No and no. Whatever you may have heard about sickly pedigree cats, it absolutely does not apply to this breed. British Shorthairs are very strong and tend to resist most illnesses. The usual predicted lifespan is around 15 to 20 years, depending on who you ask. The oldest British Shorthair I’ve ever met was all of 22 and still living a pretty full life, although not perhaps a very energetic one.

I often meet people who are interested in British Shorthairs but who are concerned about inbreeding in pedigree cats. With a robust and diverse line, this is not really an issue unless you’re unwise enough to buy from a backyard breeder. Responsible breeders will never mate closely related cats precisely because of the risk of deleterious genetic traits cropping up. If there’s a slip-up and two closely related cats are allowed to mate, any kittens produced from such a union will be neutered and never bred from.

A cat which is discovered to be carrying a heritable disease will be removed from the breeding pool and marked as “inactive” by the breeder’s registering body. If a cat breeder goes ahead and ignores these strictures, they risk being de-registered by their relevant body and won’t be able to command pedigree prices for their kittens any more; there is a strong incentive to comply carefully with all regulations. This means that your British Shorthair cat or kitten should actually be freer from genetic issues than any random moggy you might pick up from a pet store.

READ ALSO:
What does the Bible say about cats?

Do British Shorthairs have any genetic conditions?

I should start by pointing out that while there are a couple of serious conditions that crop up in this breed, they are very, very rare. Your vet will know to look for them and will be very careful to keep an eye out for any sign of a problem before it arises. There is absolutely no reason your British Shorthair won’t enjoy a wonderfully long and healthy life – please don’t worry unduly.

With that disclaimer out of the way, I will now describe the two conditions that your British Shorthair almost certainly doesn’t have:

Finally, there’s what I call Bone-Idle Lummox Syndrome (not an official diagnosis). Cats of this breed do tend to grow monumentally lazy later in life. As kittens, they tend to be fairly lively but after they finish growing (at about the age of three years) they leave behind childish things and prefer to spend their days snoozing comfortably on the sofa. Coupled with their fondness for eating this can easily lead them to become overweight, which can impact their health in various ways. Older British Shorthairs need encouragement to stay active; you can provide this by playing their favourite games and providing lots of stimulation. You may also need to manage their diets so that they don’t gain weight. Remember, the current British Shorthair’s ancestors came over with the Romans. They’ve been doing just fine for centuries.