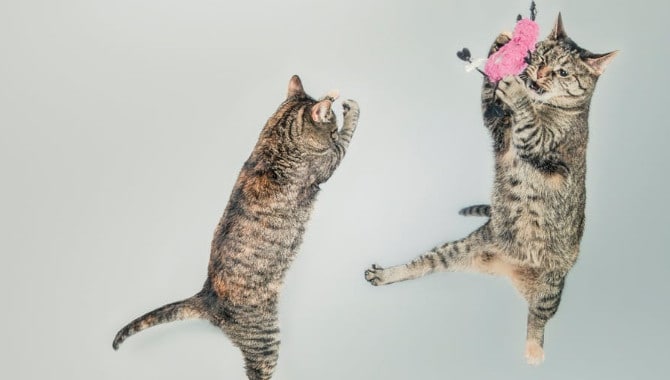 While watching my British Shorthair jump onto countertops and tree branches in my backyard, I began to entertain the idea that she possessed a very unique talent, her jumps were so high that I was astonished just watching how acrobatic she moved. I decided to investigate the topic of British Shorthair and their ability to jump. After one week of careful observation and a little research, this is what I found.

How high can a British Shorthair jump? The average British Shorthair is able to jump between 2.3 meters to 2.76 meters vertically into the air, that is equivalent to 7.5 – 9 feet high. Their ability to jump depends primarily on the length of their body and their tails.

Acrobatic jumping skills of British Shorthair or cats, in general, are often imitated in movies. Knowing just how far they can jump and the type of mechanisms within their body associated with this ability can help you to better understand your pet and put your mind at ease when he or she is jumping on or off of high places, you know that they actually won’t get hurt. Understanding their limitations can also help you to create a very safe environment for your pet, as well.

Why some cats jump higher than others?

British Shorthair is a popular British domestic cat that is able to jump five to six times its own height, so if you have been wondering exactly how high can your British Shorthair cat jump, then it’s important to note that your cat’s ability to jump depends on his or her age and size.

It takes approximately three to five years for a British Shorthair to reach its physical, developmental milestones and attain its full size, which is medium-length compared to other domestic cats. Once your British Shorthair becomes an adult, it is able to stand 12 to 14 inches tall using his or her back legs. Since these types of cats grow to be medium-length, you can expect them to average around 46cm or 18.1 inches; however, it is not impossible for your cat to be a few centimetres or inches longer in size than expected.

Male British Shorthair cats are significantly longer in length and have a longer tail compared to their female counterparts, making them the highest jumpers out of the two. Cats that are extremely heavy or overweight are not able to jump as high as cats that weigh average weight. This explains why it is so easy for some cats to leap onto the top of fridges and stoves or even over the fence in the backyard and difficult for others.

Although the length of the cat plays an essential role in allowing them to jump 7.5-9ft high, it is not the only feature of the British Shorthair that contributes to its ability to levitate into the air. The tail, spinal cord and leg muscles also play a vital role in your cat’s ability to jump high.

Does a British Shorthair’s Ability to Jump Reflect on Their Ability to Land Safely After Falling From a High Place?

A British Shorthair’s ability to fall from a high place without being harmed is attributed mostly to the internal velocity of the cat and not necessarily the length or height of the cat. In other words, the natural speed of the British Shorthair will allow him to absorb the shock of the fall. Nonetheless, British Shorthair and other domestic cats have been known to fall at least 5.5 stories high with a 90% chance of surviving.

Regardless of how high your cat can jump, it is important to take precaution and keep doors that lead to high balconies locked in order to prevent accidents. It is possible for a British Shorthair with the ability to jump 7.5ft-9ft to still get hurt falling from a very high distance.

If a British Shorthair Can Jump 7.5ft – 9 ft high, Why do They Sometimes Get Stuck in Trees?

British Shorthair along with other domestic household cats are prone to jumping onto high places; in fact, their natural ability to jump makes them fearless of heights. Jumping and climbing is a natural way for cats to stay active and fit, so don’t be annoyed if your cat spends a lot of time running around the house. Yet, despite the fact that British Shorthair, as well as other domestic cats, are not afraid of heights when it comes to jumping down from high places, they use their instincts to decide if the height that they are jumping from is in fact too high.

Cats, in general, do not intentionally jump from places that are so high that it is potentially dangerous to their well-being. However, many pet owners have experienced unfortunate accidents, especially, in the early spring or summer time when they open up windows and balcony doors to allow fresh air into their homes, their cats are left unattended with the assumption that if they do fall they will land on their feet.

A popular phrase that is dismissed by veterinarians to have no factual basis at all. The reality is that cats do not land directly on their feet, they land with their feet slightly open, causing injuries to their pelvis and muscles in their back legs. So, if your British Shorthair ever gets stuck on a tree branch or somewhere very high, do not call him or her down, the best approach would be to fetch a ladder and pick them up yourself.

Should I Train my British Shorthair to not Jump on Countertops and Other High Places?

Watching my cat bounce off the walls, onto furniture and countertops concerned me at first, I was mostly worried that she would crash into something and eventually end up injuring herself. I spent a lot of time reading about how to train her to stop jumping around, but then I realized that this was her way of staying active and fit, this was her form of exercise and she needed this as an outlet for her built up energy.

I do not encourage anyone who owns a cat or kitten to deter them from jumping or climbing on surfaces, instead, I believe it would be more beneficial to create a safe environment (cat proofing) where they would be able to be as active as they would like to be. When I notice that my British Shorthair is in need of exercise, I simply let her outside into an open space to run around or I use a giant ball to play with her when the temperature is too cold or it is raining outside.

READ ALSO:
Do British Shorthair Cats Like To Be Picked Up?

I roll or bounce the ball to her, and she responds by chasing the ball down and rolling it back to me. Engaging with her in this way keeps her active and it allows me to control her desire to run or bounce off the walls a little. You can also spend ten minutes holding your pet cat’s favourite toy above their nose when they stand to reach for it, walk backwards and they will hop or walk towards you. It’s easy to use your pet’s natural desire to be active to teach them new tricks, it allows you to bond with them and your British Shorthair would love you even more for not trying to suppress her natural instincts to be active.