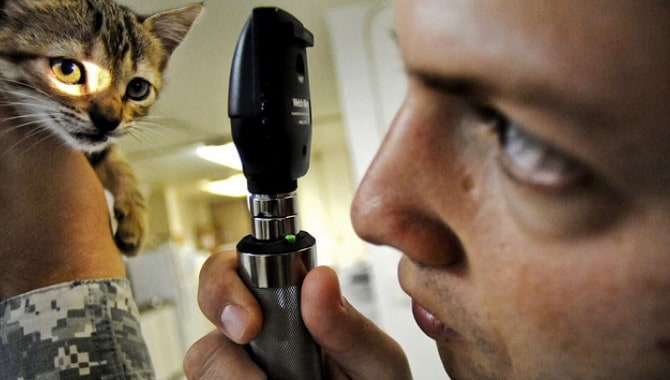 Pedigree cat lovers are often faced with heartache. Many breeds have some genetic issues or may tend to develop physical problems because of their configurations. On the other hand, we have the British Shorthair – these felines have a well-earned reputation for health and longevity. They’re an especially resilient breed – solid, hearty cats with few of the medical issues that plague many pedigree animals. Still, into every life, a little rain must fall and British Shorthairs can suffer from a few health conditions, including those that may affect all cats; disorders of the eyes are one possibility.

[su_highlight]Do British Shorthair cats have eye problems? No, not as a genetic characteristic of the breed. However, British Shorthair can develop an eye problem when growing up.  This can impair an older cat’s sight and may lead to blindness. With proper care, the cat’s welfare need not be severely impacted by reduced vision as other senses will generally compensate.[/su_highlight]

You obviously came to this page with questions about your pet’s eye health, so let’s discover some answers. Many eye problems have early symptoms that can alert you to a disorder before it becomes serious. It’s very important to know what to look out for so you can intervene and maybe save your pet’s sight. What eye problems should you look out for in a British Shorthair? How can you spot the early warning signs of an eye disorder? How can you make sure a cat with failing eyesight is happy and enjoys life? To find out more, keep reading.

Eye problems in pedigree cats: how the British Shorthair measures up

Returning to our original question “Do British Shorthair cats have eye problems?” the answer is that they’re not particularly prone to this kind of issue. It’s entirely reasonable to be concerned, given the prevalence of eye problems among pedigree cats from other breeds. Certain breeds – cats with shorter faces and rounded skulls – can have problems with their eyes due to their narrowed tear ducts.

Tears and mucus can fail to drain properly and may build up around their eyes, leading to persistent and repeated infections that require regular attention. Although the British Shorthair has a round skull, her face is round rather than short and she doesn’t have those pesky tear-duct issues. Some breeds, for instance, the Siamese, struggle with myopia and a rare condition called nystagmus, which causes these cats’ eyes to vibrate rapidly and impairs their eyesight.

Fortunately, the British Shorthair doesn’t have these problems. The large, round, well-formed eyes of the British Shorthair are no more likely to develop infections than any other non-pedigree cat and they don’t usually suffer from the vision problems that can affect other breeds. Even so, your cat can still develop an eye infection; they’re very common, with most cats picking one up at one time or another.

One more serious problem that might affect your British Shorthair cat’s eyesight is the development of cataracts. This is a thickening and clouding of the cornea that slowly obstructs the cat’s eyesight until she becomes completely blind. 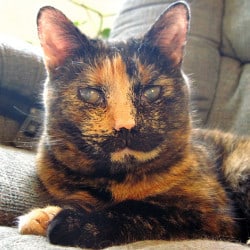 British Shorthair cats can have eyes of various colours – green, copper, amber, and blue. It’s the blue-eyed cats who seem most likely to develop cataracts, although they can affect cats with any eye colour. Cataracts are especially prevalent in later life; many of my own older shorthairs came to develop them eventually, although not until they were well into their teens. This long-lived breed is bound to feel the effects of old age; cataracts are just one of the prices they pay for their extended lifespan.

Like any cat breed, British Shorthairs may also develop glaucoma. This condition causes the pressure inside the eye to increase, damaging the eye and leaving your cat blind if not addressed. In time, despite all your care, one or more of these conditions may conspire to destroy your cat’s eyesight. This can be upsetting for a caring pet owner and the cat may struggle to adjust initially – however, blind cats can adapt to their disability and end up perfectly happy.

Some distraught pet owners have asked me if they needed to euthanise a beloved feline friend due to sight loss; I am more than happy to refute this idea. You will probably want to keep your blind cat indoors as they are rather more prone to accidents but the British Shorthair tends to be a homebody anyway. The other senses take over, including your cat’s acute hearing and those remarkable whiskers. I’ve seen completely blind cats play happily with teasers and other toys that had been fitted with a bell, navigate their living space by sound and feel, and generally enjoy life to the full. 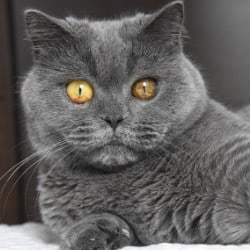 Eye infections can range from simple conjunctivitis to ulcers of the eye. Signs of an infection include reddened or watering eyes, mucus around the eye, squinting, repeated blinking and attempts to scratch around the eye. If your cat frequently rubs her eye against objects such as the corner of a table, she may be attempting to relieve the symptoms of an infection. You can try gently wiping away the mucus to see if that resolves the problem (assuming your cat permits you to do this) but if the mucus returns you should take your cat to the vet.

Infections are distressing for your pet – she may be itchy, in pain and possibly unable to see well out of the affected eye. It’s possible that the scratching and obsessive grooming behaviours may cause your British Shorthair to injure herself, either damaging the delicate skin and tissues around the eye or the eye itself. While eye infections are seldom serious if caught early, if they’re left untreated they can cause serious and lasting harm.

In very extreme cases (usually involving long-term medical neglect), a cat may lose her eye to an infection. Infections can spread from the eye to other systems (the cat’s respiratory tract may become involved via the nose) and she can easily transmit her condition to other pets in the household – even to humans, especially children. Your vet may prescribe a course of drops or ointment or possibly oral antibiotics. It’s very important to administer these as advised by your vet. If you miss doses or don’t complete the course, the infection may become resistant.

How to tell if your British Shorthair is developing cataracts 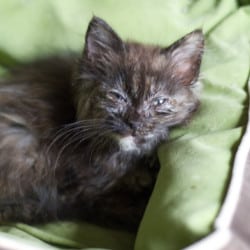 If you have an older shorthair, you need to be especially vigilant for this issue. Your cat’s eyes may start to look cloudy or milky in some lights. In any other breed I’d add something like “She may become prone to misjudging jumps or bumping into things,” but since the average British Shorthair is already such an adorable klutz this may not be of very much help to you. As a breed they have many wonderful traits; physical grace is not one of them. Still, if your British Shorthair is being even more clumsy than usual, you may want to mention this to your vet.

Cataracts are a condition of old age, usually, but may occur in younger cats. Cataracts do occur in kittens but they are very rare; in any case, they tend to spontaneously resolve over time. Nutritional deficiencies can cause cataracts but this kind of issue is rare in British Shorthairs – pedigree cats are generally very well cared for at every stage in their lives, after all. In the unlikely event that your pet does have this type of cataract, it probably can’t be reversed without surgery but the deterioration can be arrested by changing the cat’s diet, sometimes by using supplementation.

Your vet will advise you on diet and your pet will need regular check-ups to ensure that the problem doesn’t become worse. Ultimately, a cataract problem that doesn’t spontaneously resolve will need to be addressed with surgery. Your cat won’t have the vision they enjoyed before the cataract but they will be able to see properly again. At any stage, cataracts need to be monitored as they are associated with other eye problems such as detached retinas and glaucoma. 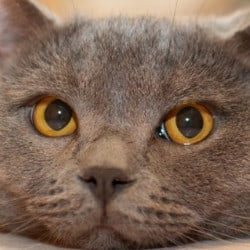 Other eye conditions that your British Shorthair may develop include glaucoma and detached retinas. A cat’s retina may detach due to injuries, such as a fall or a blow to the head or face. It may become detached due to an untreated cataract or simply due to changes caused by old age. A detached retina can also be a symptom of a serious underlying illness, such as.

While some cases can be repaired with surgery, a detached retina may prove to be irreparable and your cat will have to cope with some vision loss.

Glaucoma is another serious condition that can affect cats; this involves a change in the pressure inside your pet’s eye, affecting her vision and eventually leaving the eye blind. Signs of glaucoma are vision loss, a cloudy look to the eye, and swelling or receding of the eye. The elevated pressure may also cause your cat to suffer from headaches, which she may try to relieve by pressing her head against things. Head pressing is always a danger sign and needs immediate medical attention. Glaucoma may be a symptom of an underlying illness which will need appropriate treatment. The condition itself can be relieved with medication. Eventually, surgery may be necessary to reduce the pressure inside the eye.