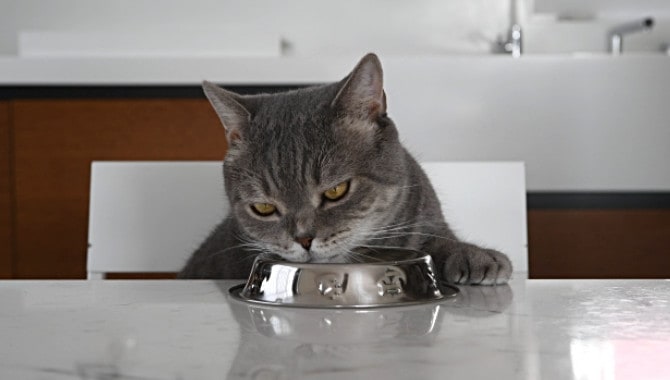 British Shorthair cats are well-known for being healthy and having robust constitutions. Long-lived and sturdy, they’re prone to fewer medical conditions than other pedigree breeds. That said, there are a few foods that can make a British Shorthair unwell, and one of those things is milk.

Can British Shorthairs drink milk? No, they most certainly cannot. Once weaned, they can’t digest dairy, and it can make them very ill. Some cats might be able to manage dairy foods, I’ve encountered some obsessive feline cheese fans in my time, but don’t risk your British Shorthair cats’ health by letting them have dairy products.

As a matter of fact, milk is really bad for a lot of adult cats. To find out why it’s such a problem and the kind of health issues it can cause your British Shorthair, we need to learn a little about feline digestion. Knowing why milk can harm your pet could save a lot of heartache in future.

Milk and your British Shorthair

The answer to the question “Can British Shorthairs drink milk?” is a resounding “No!” It’s well worth expanding on that answer, however. I’ve often heard it said that British Shorthairs are “allergic” to milk. This isn’t precisely accurate but it’s so close to the truth I usually let it slide. The issue isn’t an allergy, strictly speaking; it’s an intolerance. The problem, you see, is lactose. Like many human populations, cats just aren’t very good at digesting the lactose present in the majority of dairy foods once they’ve grown out of kittenhood. While popular culture has cats of all ages enjoying milk, cream and so on, in real life, it’s just not a good idea to feed an adult cat milk or milk products.

Kittens possess a particular enzyme that allows their systems to break down lactose, the natural sugar found in milk. As the cat gets bigger, she no longer needs her mother’s milk, and her system stops producing that enzyme. In some cats, this doesn’t happen as completely, they seem to carry on producing the necessary enzyme to some degree and thus remain able to cope with milk in small quantities. For most cats, lactose is firmly off the menu.

British Shorthair cats, in particular, tend to lack the necessary enzyme altogether and absolutely should not drink milk. They are highly prone to lactose intolerance and will almost certainly suffer digestive issues if they consume dairy in any form. Because it can’t be broken down, the lactose passes undigested into the British Shorthair’s gut where it begins to ferment. This fermentation irritates the cat’s delicate GI tract. Pretty soon, the unfortunate pet will start to show symptoms. These can range from relatively minor issues to severe problems. Minor symptoms include internal discomfort and bloating, which might not be dangerous but which aren’t pleasant for the cat. More serious symptoms include an upset stomach and diarrhoea. In the worst cases, the British Shorthair may suffer diarrhoea and vomiting.

If this happens, it’s a good idea to make sure your pet gets expert veterinary care as soon as possible, because dehydration can set in and may seriously harm the cat. It would be unusual for a healthy young cat to be seriously hurt by a single dose of milk, but older cats and cats with existing health problems can be more severely affected. The vomiting, upset stomach and dehydration caused by lactose can change all the systems in your cat’s body, causing major health problems and even death. Keep that drinking bowl filled with water, never milk.

“But my other cat eats Cheddar!”

So what about those odd cats who can manage to drink milk or consume other kinds of dairy products? Well, some cats cope better with lactose than others. Besides, some dairy-based foods don’t actually contain much lactose. This is particularly true of products like hard cheese and even some yoghurts. The microbes used to ferment the milk and turn it into yoghurt or cheese actually consume the lactose themselves, converting it into other substances. By the time they reach your table, such foods may have no lactose left at all. Thus, when your cat pulls a yoghurt pot out of the bin and licks up the remains of the treat, or your pesky pet jumps on the counter to snatch a piece of the cheese you’re slicing, they may not suffer any adverse effects. If you gave them a saucer of milk, the outcome could be very different. Milk in its usual form contains an abundance of lactose and could upset the cat’s stomach even if cheese doesn’t.

“Yikes! Any other foods my Shorthair shouldn’t have?”

“But I want to give my kitty a nice treat…”

The next question for many loving British Shorthair owners will be: well if I can’t give my cat milk as a treat, and I shouldn’t really be sharing my own food, what should she have instead? I quite understand the impulse, believe me, the British Shorthair is so sweet and loving, you want to treat them all the time. Luckily, there are lots of safe snacks and treats that your British Shorthair can enjoy. Cooked meat and fish are fine, as is a little cat-grass or catnip. People who are used to dogs may be tempted to feed their new British Shorthair cats similarly, but while dogs thrive on a fairly omnivorous diet, cats are obligate carnivores, and the range of foods they can eat safely and thrive on is much more narrow. As well as milk, you should avoid giving your British Shorthair carbohydrates, sweet foods and foods that are high in salt or other additives. If food or snack is marketed for cats, it’ll usually be safe and tasty for your British Shorthair companion; just beware of foods sold cheaply in discount stores, which may not be up to the proper health standards. When in doubt, check with your veterinarian or veterinary nurse. Remember that your British Shorthair will also welcome non-food rewards like petting, games and snuggle time. These affectionate, intelligent breed of cat that often follows you around the house, learns your schedule and waits by the door for you to get home from work. Playing a game with your British Shorthair can be more of a treat for her than even the fanciest snack. It’s undoubtedly a better reward than giving her something that might impair her health.

British Shorthair how much food?

The amount of the food that you feed your cat will depend on a few factors:

Always follow your vet’s recommendations and keep an eye on the dosage stated on the packaging. British Shorthairs are very happy to overeat – they are not hyperactive, so overeating can cause obesity and severe health problems.

What are the most common cat food allergy signs?

Our little furry friend cannot talk (in English at least), so it’s your responsibility to keep an eye on your’s cat health and behaviour. He might be signalling that something is wrong:

What are the most common foods that can cause allergies in cats?