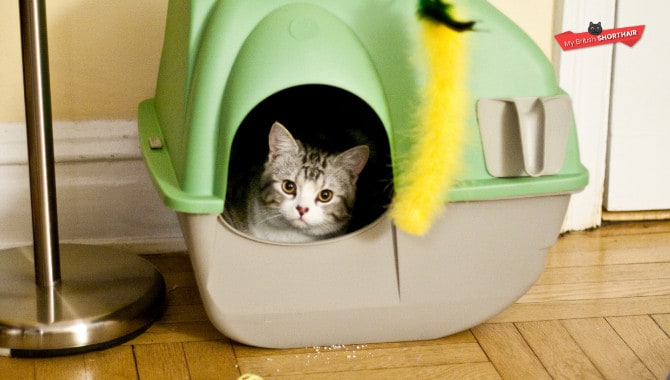 Buying a litter-box for your cat shouldn’t be complicated, right? Surely this is a “one size fits all” situation. Even if your cat belongs to a larger breed, such as the British Shorthair, the most you’d need to do is grab one of the bigger trays from the pet supply store. Right? Wrong. In fact, your British Shorthair may need something significantly larger than what’s available at your corner pet-shop.

Table of contents: show
What size litter-box does your British Shorthair need? The length of the litter box should be x 1.5 the length of your cat (excluding the tail) and the box should be as wide as your cat is long. If you can’t find a suitably sized litter-box in stores, you will need to adopt one out of another container.
Finding the right size of litter-box.
Why does my cat use her small litter-box if a big one is really necessary?
What if I have more than one cat? Do I need a double litter-box?
I gave my British Shorthair a bigger box but there’s still a soiling issue. What do I do?

What size litter-box does your British Shorthair need? The length of the litter box should be x 1.5 the length of your cat (excluding the tail) and the box should be as wide as your cat is long. If you can’t find a suitably sized litter-box in stores, you will need to adopt one out of another container.

Why on earth does your British Shorthair need such a large box? Are there negative consequences for using a smaller one? If cats really need a litter-box that’s so big, why do they use smaller boxes at all? What if you have more than one cat? To find out more, read on.

READ ALSO:
Why Is My Cat Purring So Loudly?

Finding the right size of litter-box.

What size of litter-box for a British Shorthair? Well, to feel okay using their litter-box, a cat needs adequate space. Your British Shorthair should be able to comfortably turn around inside the litter-box and will require enough room to step away and “bury” everything when their business is concluded.

A box that’s too small can make your cat anxious or uncomfortable about using it. As discussed previously, you can ascertain the right dimensions for your British Shorthair’s litter-box by measuring your cat from nose to hindquarters, excluding the tail. This gives you the approximate width of the box. To find the length, take the length of your cat and multiply it by 1.5. As you can imagine, this makes for a plus-sized litter-box if you have a full-grown British Shorthair.

Finding a large enough box isn’t a problem during kitten-hood, when a standard commercial litter-tray may be just fine, but later in your cat’s life, you may find that correctly sizing your cat’s box requires a bit more floor space, and possibly some creativity and elbow grease. Most manufacturers simply don’t make a large-enough litter-tray for big breeds like the British Shorthair. In point of fact, the majority of commercial litter-boxes are too small even for a more petite feline.

Why this might be, I can’t really say. My best guess is that people often don’t want to give up large areas of their living space for a kitty master bathroom and litter-box sizes tend to reflect that reluctance, rather than the needs of your cat. This means that the majority of litter-trained cats are actually coping with an under-sized tray.

As a caring pet owner, you’ll want to give your British Shorthair the proper facilities. If you can’t find a big enough litter-box, it’s easy and cheap to make your own. Get a large plastic storage box of approximately the right dimensions (you can find them at larger supermarkets, discount stores and DIY centres) and cut one of the sides down to the height of a normal litter tray. You can use a small hacksaw for the task. You may wish to sand the cut edges down with a piece of emery board to avoid snags and scratches, as they’ll probably be a bit rough. You only need to shorten one side of the box — leave the others as they are.

Your cat will easily be able to access the box via the cut-down side, while the taller sides help prevent litter spills and give shyer cats a measure of privacy for their ablutions. Constructing such a “master bathroom” for your British Shorthair only takes a few minutes but can have a number of benefits, as we shall see in the following paragraphs. Even if your British Shorthair has no obvious problems using her current facilities, giving her a properly sized litter box may make her a much happier cat.

Why does my cat use her small litter-box if a big one is really necessary?

Have you ever been on a long bus or train journey? Did you find yourself crossing your legs and holding out for the public conveniences at the station rather than braving the pint-sized WC on the vehicle? If push came to shove you’d use the facilities on the train, but it’s hardly your preferred option. That may be more or less how your cat feels. Ideally, she’d like a more commodious commode, but she’d rather use the mini-box than nothing at all.

If your British Shorthair doesn’t feel okay about using her litter-box, you may see a number of untoward effects. First of all, she’s apt to hold on rather than going when she needs to. This can lead to problems like constipation and the dreaded urinary tract infections.

Another effect may be that your cat decides to protest, by urinating or defecating outside of her litter-box. If you’re lucky, this will be on the floor next to the box. If you’re not… well, cats are smart and British Shorthairs are smarter. They know where to relieve themselves if they don’t want you to find the mess immediately, or if they want to inconvenience you as much as possible. Playing Hunt the Distressing Smell all night or constantly washing your bedlinen are just two of the likely outcomes of an unacceptable litter-box situation.

What if I have more than one cat? Do I need a double litter-box?

No, you don’t have to turn your entire living space into Litter Central to keep your cats comfortable. Cats generally don’t use the litter-box simultaneously so it doesn’t need to accommodate all of them! Just make sure it’s big enough for your biggest cat. One good-sized litter-box should be enough for even the most fractious feline household.

If there are squabbles, setting up that smaller box in another room can be a way to resolve the situation. Cats use their waste as a way of marking territory and can get a little fussy if another cat jumps into “their” litter too soon. Think of it like creating a cloakroom elsewhere in the home to ease up the queue for the main bathroom. Just as adding a cloakroom to your house can smooth out those morning squabbles over the shower, adding an extra litter-box can help reduce friction between your pets.

Like a cloakroom, it doesn’t need to be as big as the master bath. If the dominant cat really won’t stop hogging the bigger box, though, you may wish to expand that cloakroom to give your more timid pet the space they need. This is just one of those little oddities that British Shorthair owners have to learn to tolerate.

I gave my British Shorthair a bigger box but there’s still a soiling issue. What do I do?

First of all, make sure that your cats have fresh litter. Like all cats, the British Shorthair is rather fussy and fastidious about that sort of thing. You should be removing solid waste daily and changing their litter every few days. If the litter-box isn’t emptied, cats can become reluctant to use it.

You might also consider a different brand of litter, as some cats may object to the smell or texture of their current litter.

Another issue can be territorial. If you have an un-neutered male cat, he may very well engage in territorial scent marking. This involves spraying and urinating on his territory… which unfortunately includes your house and everything in it. A larger litter-box really won’t help much, since this is a different issue. Neutering him may help, as may rewarding proper litter use and penalising scent marking with a spritz of cold water. Cats may also soil if they’re cross with you about something; exactly what’s bothering them may take a little detective work.

Another possibility is an illness, especially an infection of the digestive or urinary tracts. If your cat was previously well-trained in using her litter-box, this is very likely. Resolving the infection can stop the soiling. Sadly, elderly cats may start to forget themselves and have little accidents around the house. My advice here (after having your pet checked for infections or other issues) is to invest in a supply of washable or disposable pads and then try to make the most of the situation as you may not have much longer with your friend.

Another, a more hopeful possibility is that your pet’s diet is at fault. She may simply be eating something that disagrees with her. Avoid giving your British Shorthair “people food” and switch her to a grain-free recipe. This may solve the problem. Your cat may also feel uncomfortable with the box’s current location. Cats are often rather eccentric about their litter-box and its placement; some may be coy and prefer a box that’s tucked out of sight, while others seem to want you to stand guard. Try moving the box.